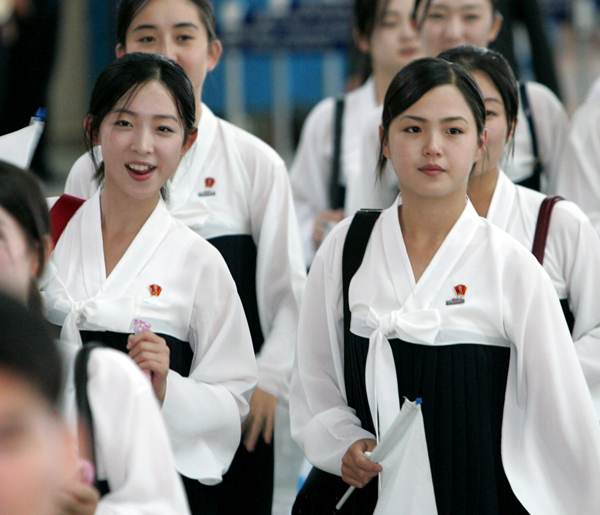 Ri Sol-ju, center, first lady of North Korea’s Kim Jong-un, leaves Incheon International Airport in September 2005, when she was 16, after a six-day visit to the Asian Athletics Championships in Incheon as a member of a delegation cheering on the North Korean team. [YONHAP]


Pyongyang’s sudden identification of North Korea’s new, 23-year-old first lady, Ri Sol-ju, was something new for the reclusive regime and a further suggestion that young leader Kim Jong-un is striving for a leadership style distinct from his late father’s in order to cement his power.

State media Wednesday night identified the mystery woman who had been photographed with Kim since July 7 as his wife, seven months after the new leader took power.

In the reclusive communist country, previous first ladies have been largely kept out of sight. When the late South Korean leader Kim Dae-jung brought his wife Lee Hee-ho to the inter-Korean summit in June 2000, then-leader Kim Jong-il showed up alone.

Among Kim Jong-il’s four wives, the first three made few public appearances. His first wife, Song Hye-rim, who died in 2002, was rarely seen because father-in-law Kim Il Sung opposed the marriage. Ko Yong-hui, the third wife and the late leader’s favorite, was never seen in public or in state media’s reports before she died in 2004. (She was the mother of Kim Jong-un.) Kim Yong-suk, his official wife approved of by his father, never made an appearance.

Kim Il Sung’s second wife, Kim Song-ae, frequently appeared at official events and was a former communist activist. But she disappeared in the 1980s, reportedly because Kim Jong-il denounced her as a stepmother.

Left: Ri, who was known as a singer of the Unhasu Orchestra, sings a solo piece entitled “Soldiers’ Footprints” at a New Year’s concert in 2010. [YouTube] Right: Ri, at center, waves at a 2003 tree-planting event held on Mount Kumgang. [YONHAP]


Analysts say most of Pyongyang’s first ladies came from the arts, including a pianist, dancer and actress. South Korea’s intelligence service yesterday said that Ri was a singer in the Unhasu Orchestra, a team composed of young, promising musicians. 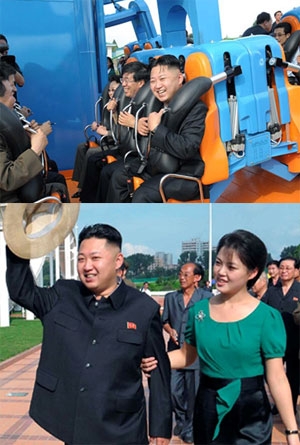 “In North Korea, artists, including singers, are part of the elite,” Kim Yeon-soo, a professor at the Korea National Defense University told the Korea JoongAng Daily. “Many mothers are eager to send their children to state-run art schools for their futures.”

Kim Yong-sun, a North Korean defector who was a dancer, told the JoongAng Ilbo, “A lot of singers who belong to the Unhasu Orchestra or the Bochonbo Orchestra married high-ranking officials of the ruling Workers’ Party or the Foreign Ministry.”

Speculation is high that Kim Jong-un wants to consolidate his control by showing maturity and North Koreans don’t regard single men as adults.

“Kim is trying to promote a stable leadership by bringing his wife to official events,” Yun Sang-hyun, a Saenuri Party lawmaker who attended the closed-door meeting with the security service yesterday.

“The NIS says that he is also trying to mimic his grandfather, founder Kim Il Sung, clasping his hands behind his back and wearing double-breasted winter coats.”

Baek Seung-joo, director of the Center for Security and Strategy at the Korea Institute for Defense Analyses, told the JoongAng Ilbo that the Swiss-educated Kim wants to adopt a somewhat western-style leadership.