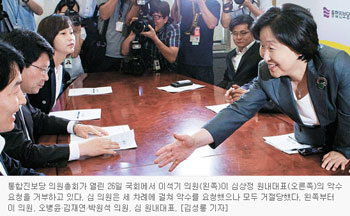 The minor opposition Unified Progressive Party failed to kick out two lawmakers, Lee Seok-gi and Kim Jae-yeon, who have refused to forfeit their seats in the National Assembly to take responsibility for a rigged primary scandal that has torn the party apart.

The failure has thrown the party into new turmoil.

As per the law, the vote was taken among the party’s 13 incumbent lawmakers in the National Assembly, including Lee and Kim, yesterday. One representative, Lee Sang-kyu, couldn’t vote because he was busy with personal matters.

“Before starting the vote, the incumbent lawmakers had a closed-door meeting starting from 8 a.m.,” Park Won-seok, a spokesman for the party, told reporters after the voting. “The meeting was suspended and resumed at 3 p.m. There, a total of 12 lawmakers voted and five of them abstained.

“Seven cast ballots and six were in favor of the expulsions, and one ballot was nullified,” Park said. “Still, according to the Political Parties Act, more than half of the incumbent lawmakers of a party, which would have been seven, should agree on expelling a fellow lawmaker.”

“Taking responsibility for failing to pass the vote, the floor leadership will all step down,” Park said.

In the primary, a total of 14 candidates were elected including Lee and Kim, who went on to claim parliamentary seats after the April 11 general election.

However, after the party’s internal investigation revealed that the primary was rigged, all of the party members who won candidacies in the primary stepped down except Lee and Kim.

The nation’s third largest party has come under fire over its factional fights over the issue of whether to admit the rigging of the primary. The party’s smaller faction insists the primary was rigged to favor candidates including Lee and Kim. It wants them to step down.

However, the larger faction, former pro-North Korea student activists who mostly belong to the party’s eastern Gyeonggi regional chapter, argue that the smaller faction is trying to politically damage its supporters and take over the party.

Lee and Kim welcomed the result of yesterday’s vote.

“Today is the day that the truth won and the liberals won,” Lee told reporters covering the National Assembly.

Kim said, “We will make efforts to move toward unification and cooperation, overcoming all scars of the past.”

Representative Kim Mi-hyui, who opposed expelling the representatives, said she will continue to disbelieve the party’s investigation of the primary in March. “Regardless of expelling Lee and Kim, it is a matter of restoring dignity to the party,” she said.