Activist to create body for Dokdo

Activist to create body for Dokdo 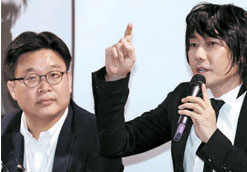 Singer Kim Jang-hoon, an outspoken activist for Korea’s claim over the Dokdo islets, said yesterday that he will set up a private foundation to promote the country’s sovereignty over the islets throughout the entire world.

“In August, I will establish a foundation called ‘Dokdo Culture Camp,’ which will be responsible for supporting research on the islets,” Kim said in a press conference held in the 63 Building in Yeouido, western Seoul.

“For some time now, I’ve been planning to build a multicultural complex in Seoul, tentatively called Dokdo Land, to promote a better understanding of the islets.”

Kim added that in the process of planning the complex, he had thought that establishing a foundation would help generate more transparency to keep track of funding received to promote the project.

The foundation will be managed by a board of directors with some 10 members, including Kim, activist Seo Kyoung-duk, visiting professor at Sungshin Women’s University and Yuji Hosaka, professor at Sejong University.

The celebrity and Seo have joined forces previously to advertise the islets as Korean territory in the U.S. media, including taking out a full-page ad in The New York Times.

Regarding some of the criticism that Kim’s voluntary activities claiming Dokdo islets would make it seem as if the land is a disputed territory, the singer said that the issue cannot be left behind.

“If young people in Japan learn distorted history and write about the lesson online through social network services, it will become an even bigger global dispute.”

The islets, 90 kilometers (55 miles) east of Ulleung Island in the East Sea, have been a constant stumbling block for Korea-Japan relations.

Professor Seo, who was also present at the press conference, explained that since one year ago he has been discussing with Kim the building of a global attraction site in Seoul and came up with the idea of building Dokdo Land.

“In Paris, you have the Eiffel Tower, and in New York, the Statue of Liberty,” Seo said.