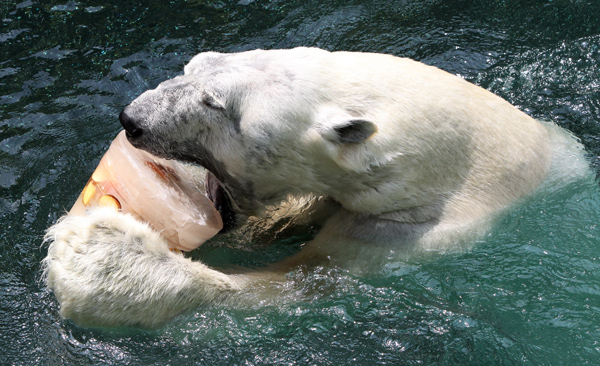 A white polar bear munches iced fruit yesterday at a zoo in Everland in Yongin, Gyeonggi, to cool off the scorching heat. [YONHAP]

Hapcheon County, South Gyeongsang also came in at a steamy 38.6 degrees Celsius while Daegu sweated it out with the mercury reaching 36.2 degrees Celsius.

Daegu and its surrounding areas in North Gyeongsang have been under heat-wave warnings since Friday with four consecutive “tropical” nights with temperatures staying above 25 degrees Celsius from 6 p.m. to 9 a.m.

Korea Railroad Corporation workers stationed in Busan and South Gyeongsang spent the day spraying water onto railroads as part of efforts to prevent the rails from bending in the heat.

A number of casualties from the summer heat has been reported earlier this week .

An elderly husband and his wife, 80 and 77, respectively, collapsed while farming in a vinyl greenhouse in Chilgok County, North Gyeongsang, Tuesday and died from excessive exposure to heat.

Meanwhile, the Korea Power Exchange is closely monitoring the rate of electricity reserves as its consumption will likely to soar due to the heat wave in order to prevent a sudden blackout like the one experienced in September of last year, which caused a public uproar as the power outage occurred without prior notice from authorities.

The government has been urging citizens and companies to cut back on electricity consumption, requesting people maintain temperatures inside buildings at 26 degrees Celsius.

As the country as a whole was caught in a heat wave, electricity demand spiked at 73.35 million kilowatts at around 1:50 p.m. yesterday, outrunning Wednesday’s consumption level at 73.15 million, dipping the reserve rate to 5 percent.

When the reserve rate goes under 5 percent, or 3.67 million kilowatts, a “caution” warning is issued, the fourth-highest level among the five emergency categories.

The Ministry of Knowledge Economy forecast the emergency situation with the electricity reserve to continue today and will be eased next week as the summer break season for the industry is to begin.

Amid warning signs of a possible electricity shortage, the Minister of Knowledge Economy Hong Suk-woo called off his scheduled vacation set to begin today.

“We will continue talks in earnest with local residents,” said the minister. “However, it will be inevitable to start operating the Gori-1 nuclear power plant by Aug. 3 to make it fully operational in the latter half of the month, when the electricity demand is expected to be highest as factories will go back into full production after vacations.”