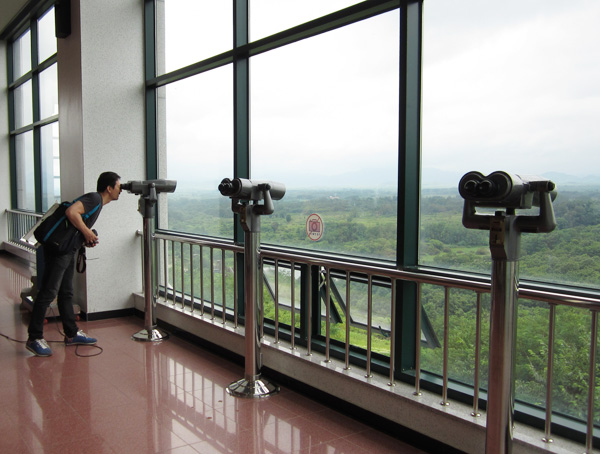 The Demilitarized Zone along the 38th parallel is a place of incongruities. Not only is it one of the world’s most militarized areas, for the next month and a half it will be an art museum.

Eleven artists from around the world have joined forces to create an exhibition titled Real DMZ Project. Their intent was to “offer their own viewpoint on the divided reality of the Korean Peninsula in today’s context.”

Looking forward to the day when this place that is in a constant state of confrontation and tension loses its raison d’etre and becomes “‘demilitarized’ in the true sense of the word,” participating artists placed installations, photographs, paintings and videos in five locations on the route of the Cheorwon Security Tour.

Real DMZ Project opened to the public yesterday and will continue as part of the security tour through Sept. 16.

Before its launch yesterday, Samuso, the organizer of the project, invited local media to take the tour on Monday.

Several works of art, some obvious and others less so, are displayed at points along the Cheorwan Security Tour. Clockwise from top: Observation binoculars are integral to Francois Mazabraud’s “Hidden Landscape,” Kim Lyang’s “My Saintly Shelter,” and Dirk Fleischmann’s “Chandelier 363” and “Reading Meaning.”

The tour, which lasts about three and a half hours, starts at the Iron Triangle Tourist Office, the headquarters for staff in charge of the preservation and maintenance of historical sites. 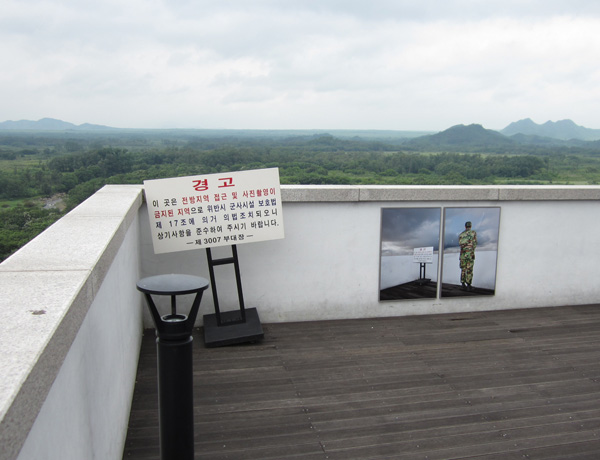 Bottom: Korean artist Noh Sun-tag’s “To Survive vs. Once Arrived.” Provided by Samuso


On the second floor of the building is the first piece of art: “To Survive vs. Once Arrived.” Korean photographer Noh Sun-tag documents social and political issues in contemporary Korean society. He contributed pictures of the backs of visitors taken at various spots along the security tour, which illustrate people’s desire for a glimpse of the North.

The next stop is inside the Civilian Control Line, at a tunnel that is believed to have taken the North Koreans more than three years to build with the intent of invading the South 20 years after the Korean War.

However, it was discovered in March 1975 by a South Korean sentry who heard an underground explosion.

According to the tour guide, 10 South Korean soldiers died while inspecting the tunnel.

Although the tunnel is 3.5 kilometers (2.2 miles) long, the tour allows visitors access to only about 500 meters.

Arriving in front of the tunnel, a South Korean soldier hands out helmets as protection from the low ceiling. Walking with heads lowered, tourists listen to the guide tell jokes about the height of North Koreans.

At the end of the tunnel, a small television plays a video clip about the discovery of a second tunnel.

Next to it, a distorted chandelier sitting on a mirror glows, seemingly incongruous in this dark, damp place. It is an installation work by German artist Dirk Fleischmann, who explained that “chandeliers are special objects for special places. The meaning of this installation is not in the chandelier. It’s in the relationship of the chandelier to the space around it.”

Stop number three is the Cheorwon Peace Observatory, accessible by monorail. It is where most of the Real DMZ Project works are on display. Frehch works include Simon Morley’s “Edgemen,” Amandine Faynot’s documentary video “248” and Francois Mazabraud’s installation “Hidden Landscape.”

There also is “Dislocated Cinema,” an installation by German artist Nicolas Pelzer and Korean contributions including Lee Joo-young’s video installation “Waiting Together 10 li from DMZ” and Kim Lyang’s documentary video “Regeneration of the House: A Dream House by the Border.”

Faynot, whose work has focused on violence and borders, contributed a a documentary on the lives of soldiers at the military base DMZ.

The artist said she stayed in four military camps in Cheorwon for a week to produce the documentary that can be seen on the first floor of the observatory.

“My focus is on the absurdity of the situation. South Korean soldiers have been training for nearly 60 years, ever since the two Koreas called a ceasefire agreement in 1953, and they are still in a confrontation. But at the same time, nothing has happened and these soldiers are waiting,” said Faynot, who said she wanted to come to South Korea because of this unique situation.

According to Faynot, lives of South Korean soldiers in military camps near DMZ were “calmer” than she expected.

“I expected more tension, but it wasn’t like that. I really wanted to stay more than 10 days every day and night to understand their lives better. I didn’t want to come here to just pick up information and leave, but I wasn’t allowed.”

“As this building is very close to one of North Korean guard posts and these windows are not bulletproof, we restrict access during emergencies, such as the Cheonan incident. It was closed for two months,” said the officer on duty.

Three telescopes are installed in front of the panoramic windows, which allow visitors to witness the scene of DMZ closer by inserting a 500 won coin.

One of the telescopes, however, is an installation by French artist Francois Mazabraud, in which viewers see a graphic image created by the artist.

“I created this installation totally identical to the real telescope next to it so visitors can get confused,” explained Mazabraud. “I think when you look through the real telescope to look at the DMZ, you are already looking at something that is not real because you are looking at it through a device.”

French artist Morley also contributed paintings of Mount Geumgang and a train to be installed in Woljeong-ri Station, the fourth stop on the tour. The station was built during the Japanese occupation and served as a stop for trains linked Seoul and Wonsan in the North.

The trains in the painting used run through Cheorwon to Mount Geumgang in North Korea, which is no longer accessible.

The last stop is the Labor Party Building, which was used by North Korea founder Kim Il-sung to promote communist politics and control people before the Korean War. For five years, North Korea ruled this area, committing numerous brutal acts such as torturing and killing. The building was so notorious that people used to say that “anyone who goes in there never comes out unscathed.”

In an open space in front of the labor building, is an installation by Korean artist Kim Lyang, who lives and works in France, titled “My Saintly Shelter.”