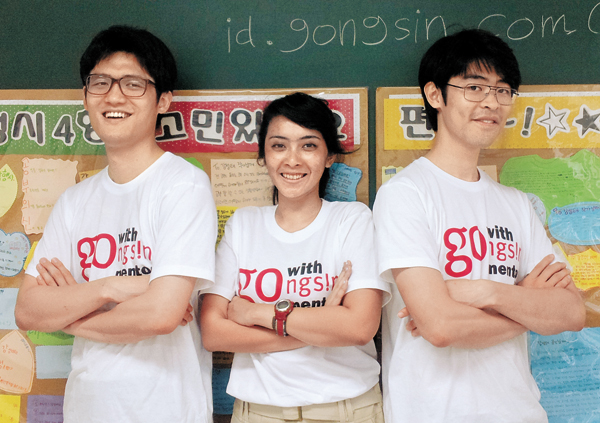 
The Korean Wave of education is sweeping over Indonesia. “Gongsin,” or god of studying, a social enterprise established by Kang Sung-young and his older brother Kang Sung-tae to mentor high school students for free in Korea, has extended to Indonesia.

Kang Sung-young initiated the enterprise in Indonesia. Along with three college students from Indonesia, including Maria Anggit, he founded “Mahamentor” in last May. It is an Indonesian version of Gongsin. By visiting a local school and students, Kang composed programs with the principal.

Kang is enrolled at Seoul National University and studies electrical engineering. In 2010 for his military service, he volunteered at the Korea International Cooperation Agency and started teaching in Magelang, central Indonesia. He said, “I want to see the possibility of each child realizing his or her dream in the fourth most populous country in the world.”

Within a year, Mahamentor grew to having 435 mentors. The program helps 15,000 high school students from 50 schools. The number of participating cities increased to seven, including Jakarta and Solo. The enterprise has been mentioned 20 times in local newspapers and broadcasted three times.

The co-founder, Anggit, said, “Although Indonesia has 17,000 islands, the lack of educational services transfer poverty from one generation to another. Many children are shocked to hear that there are job opportunities besides being a farmer, police officer or professional soldier.”

She mentioned the influence of Korean films and said, “Using the Korean movie ‘My Sassy Girl’ to explain how dreams come true helps the students to build their dreams.”