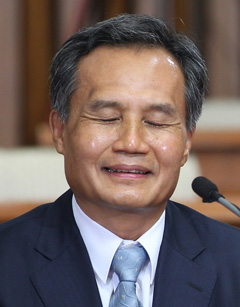 Following a decision by a senior prosecutor to give up his nomination to the Supreme Court bench, the nation’s highest court began the process of finding a new candidate .

Kim Byung-hwa, a 57-year-old director of the Incheon District Prosecutors’ Office, issued a statement on Thursday evening and said he will give up his nomination.

The decision ends 51 days of controversy as Kim was accused of a series of irregularities, including possibly influencing an investigation into a savings bank scandal.

He also was accused of real estate speculation and other irregularities.

“I concluded that giving up my nomination will be my last way to serve the country, because any further delay in filling the Supreme Court vacancies would be a bigger national problem,” Kim wrote.

Four of the 13 Supreme Court justices completed their terms July 10, and the political deadlock over the nominees, particularly Kim, created a serious obstruction of court operations over the past weeks.

In his statement, Kim said it is still his honest intention to lay bare the truth and prove he is innocent of the allegations surrounding him.

Although he provided an adequate explanation at the confirmation hearing, it was not accepted, he said.

“My family and I were seriously disgraced,” he added.

The Supreme Court issued a statement on Thursday to express its respect for Kim’s decision.

“Kim is a man of great personality and ability, and we feel sorry about his decision,” it said.

The court also held a meeting late Thursday night to begin the process to find another candidate.

“Because this is an unprecedented incident, we are reviewing relevant regulations and other cases of failed nominees,” a Supreme Court official said.

The court is expected to form a new nomination committee next week to begin the selection process.

The 10-member committee will include the minister of court administration, the Justice Minister and the president of the Korea Bar Association. The committee also also required to include three non-legal professionals and one woman.

After the committee receives recommendations and makes a selection, the Supreme Court chief justice will select the final candidate. After the legislature holds a confirmation hearing and gives its approval, the president will appoint the new justice to the Supreme Court.

It will take about two months from the formation of the committee to the appointment, but the Supreme Court is expected to expedite the process.

The National Assembly is expected to vote on motions to confirm the remaining three nominees on Wednesday.

The liberal opposition Democratic United Party, which led the efforts to disqualify Kim, said it would cooperate with the ruling party to approve the three nominees.