Jeju police try to put a stop to rumormongering

Jeju police try to put a stop to rumormongering

JEJU - The Jeju Provincial Police Agency on Thursday posted a message on Twitter that read: “The rumor that nine ethnic Koreans from China have kidnapped two women in Jeju Island is false.”

The message was posted by officer Choi Yoon-sang, the PR chief of the agency. 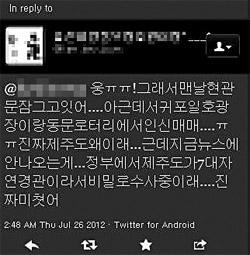 “Groundless rumors that make the people of Jeju anxious have been spread over the past few days,” he said. “We judge that such rumors are produced based on the murder that happened on the Jeju Olle hiking course.”

Jeju is having trouble dealing with the rumors as they spread over social networking sites such as Facebook and Twitter, negatively affecting the atmosphere on the island.

The most prominent rumors are “Ethnic Koreans from China are hunting women” and “The killer in the Olle murder case is Chinese.”

On Monday, the Dongbu Police Precinct in Jeju arrested a 46-year-old man surnamed Kang for kidnapping and killing a 39-year-old woman who went missing for 11 days after she came to Jeju to go hiking.

The victim’s body was found in a bamboo grove in Seongsan Township, near the popular hiking course.

Since the initial rumor was posted, netizens have been re-tweeting the rumor without clear details or sources. The tweets read “Two women went missing in Dongmun Rotary and Ilho Sqaure last week” and “I saw the group of kidnappers on my way home.”

Some people are telling others not to visit the island. “Don’t go to Jeju alone, especially if you’re a woman,” one message read.

Because the rumors spread so quickly, police were forced to take action. Through the agency’s official Twitter and Facebook pages, they have appealed to netizens to stop posting rumors that can cause panic among Jeju residents.

“I can’t believe that people are producing false rumors after a tragic incident. The police must track down the disseminators and punish them severely because they are damaging the image of Jeju Island.”

As the anxiety worsens, a woman who ran away was treated as a missing person case.

The Seogwipo Police Precinct in Jeju said they have been tracking down a 40-year-old woman’s whereabouts for five days as her family reported to the police that she went missing since July 18.

The police searched her workplace and nearby home but had difficulty locating her because her cell phone was turned off.

However, the case was closed in an awkward way on Wednesday. The woman saw the news reports on the Internet and called her family to tell them she was fine.