Drama in the water for star swimmer

Drama in the water for star swimmer 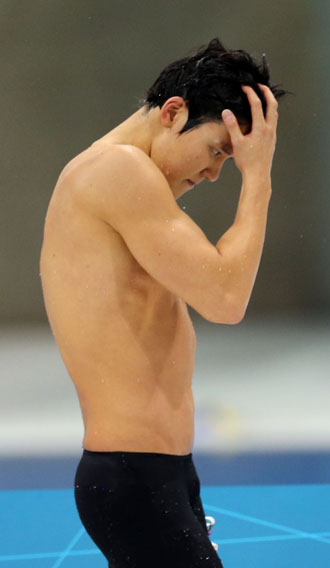 After his four-year-long pursuit for another Olympic gold medal in 400-meter freestyle stumbled in an emotional turn of events, Park Tae-hwan was overcome with emotion, cutting short a meeting with reporters as he wiped away tears.

A disqualification in the preliminary stage, a decision that was annulled hours after Korea appealed for a video review, might have been too much stress for the 22-year-old defending champion.

A loss to his archrival, Sun Yang of China, was also a blow, although the good-will swimmer delivered a congratulatory message to Sun for his victory. Park qualified for the semifinals in the 200-meter freestyle coming in fifth place yesterday. His last event will be the 1,500-meter freestyle. He’s trying to return to form after struggling in 2009. But after coming short in the event that he is strongest in, he may have been thinking whether or not he could live up to expectations.

“Today has been a long day for me,” he told reporters after the 400-meter freestyle final. 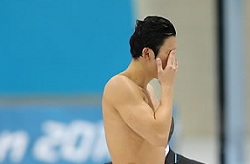 The winner of the 2008 Beijing Games went through a marked slump, failing to make the finals in the 200-meter, 400-meter and 1,500-meter freestyle events at the 2009 Rome World Championships.

He aimed to build on momentum and during the finals at the Aquatics Center in the Olympic Park in east London on Sunday, Park led during over the first 300 meters at a world-record pace, despite the early hubbub surrounding the disqualification call.

The final was held less than four hours after the FINA, the world governing body of swimming, reversed a judge’s disqualification call and reinstated him at the recommendation of FINA’s technical commission.

During the preliminaries, Park, who posted a time of 3:46:68, the best record in the third group, and the fourth best record among the 28 athletes, had to wait for hours amid uncertainty of whether he could compete in the finals.

Sun, swimming in the fourth group, advanced to the finals with the fastest record, 3:45:07.

Park said he did not want to blame the disqualification decision for his loss to Sun, but indicated that affected the result.

“Because of the decision, which was unfortunate, it was very difficult for me during the period between the heats and the finals,” Park told reporters.

After his disqualification call, several Korean media outlets, quoting a Korean commentator on a local television program, reported that the judge who disqualified him was Chinese, triggering a war of words on the Internet between Koreans and Chinese. The judge later turned out to be an American.

Sun, 20, said in media interviews he liked that Park was allowed to compete in the finals to show that he could beat him.

“I have swum my personal best time and I want to use this swim to tell the South Koreans something,” Sun was quoted as saying by China’s official Xinhua News Agency.