The man behind Jin Jong-oh

The man behind Jin Jong-oh 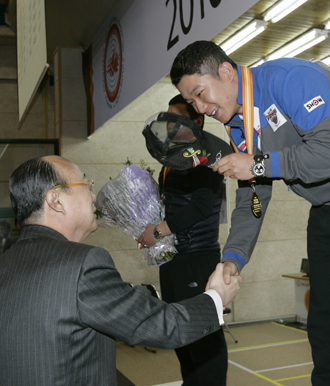 Hanwha Group Chairman Kim Seung-youn gives a medal to Jin Jong-oh after the Hanwha Chairman Cup national shooting competition in May 2010. Provided by the company

Many Koreans were delighted to hear that shooter Jin Jong-oh delivered Korea’s first gold medal in the London Olympics, but probably none other than Hanwha Group Chairman Kim Seung-youn, who many sports pundits claim is the reason for Jin’s success.

“I’m really proud of Jin Jong-oh who made the nation proud with the gold medal,” Kim said.

The 60-year-old businessman, who was in Iraq for the company’s building projects, has been an avid supporter of the nation’s shooting sports.

Hanwha founded the Galleria shooting team in 2001 and supported shooters such as 2000 Sydney Olympic silver medalist Kang Cho-hyun and other prospects. In addition, since the company’s executive Kim Jung was appointed as the president for the Korea Shooting Federation (KSF), the company has been injecting more than 8 billion won ($7 million) into developing the sport.

In 2008, it even founded a local shooting tournament to provide more opportunities to the country’s promising shooters. The competition first adopted electronic targets and helped local shooters to have conditions like other international competitions.

“If there wasn’t big support from companies and people like Kim, Korea shooting sports probably wouldn’t make progress in the Olympics or other international events,” an official from the KSF said.