Sex jokes in Korea? Shin is just loving it

Sex jokes in Korea? Shin is just loving it 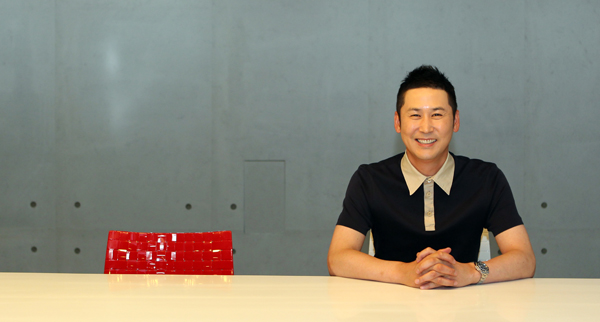 
Shin Dong-yup, 41, a veteran entertainer, is definitely the “it comedian” these days in the television variety shows.

He hosts five TV shows - one on cable - but his acting and sex jokes on “Saturday Night Live Korea” are a reminder to everyone that he is still No. 1 when it comes to adult comedy.

Shin is back on top after a lengthy period when Yoo Jae-suk and Kang Ho-dong dominated the scene. But after the ups and downs of a 20-year career, the irrepressible Shin has pretty much seen it all.

Q. Your adult jokes are still the talk of the town. What do you think about that?

A. I have always been thinking about naturally grafting sexual codes into comedy, because that’s what grown-up men and women naturally talk about.

After finishing the daily sitcom “3 Men and 3 Women” (1994), I proposed a late-night adult sitcom. That was more than 15 years ago. Only now are people showing interest, probably a proof that our society becoming more embracing toward cultural openness.

You seem unrivaled in that field, perhaps because you’ve been doing it for a long time. How do you keep it fresh?

It just naturally comes out ... I may have a different approach and perspective or maybe it’s just I’m the only one who spits it out. The point is that it is fun.

You balance things well. How do you keep from crossing the line?

Mostly it’s instinct. If someone asks me how I do it, my answer would be, “I don’t really know how.”

But I do think there is a line that shouldn’t be crossed, yet should be pursued as closely as possible. I’d rather not do it at all than to either stray over that line or play it safe.

On drawing that line, I only have my own standards to refer to and I am often amazed at how well they correspond to the standards of most people.

In a sense, life as well, might be a process of striving to reach that “line.”

What do you mean by your own standards? What are they?

Making people laugh often leads to making fun of people, imitating, teasing and embarrassing them. Sometimes even I could be the target. When laughing at someone like this, the important thing is that the one being laughed at must be able to join in. We have to be able to laugh together.

You overstep the line when someone feels personally humiliated. Laughter should heal, not hurt.

This is like a second nature for me. I’ve never seen myself as a kindhearted person, but I often find myself caring for and looking after people excluded from society

Could it be your handicapped (hearing-impaired) brother’s influence?

Though it is my job to make people laugh, if there is the slightest possibility of anyone being hurt or left out, I’d give up the laughter without hesitation.

Until recently, the trend was toward outdoor variety programs, which meant a slump for you, right?

Shouting and playing games in the wild are something I’m not good at. My throat goes hoarse and my strength is sapped. I’m certainly not talented in that regard. I always admire those who can really pull those off.

We’ve even heard it said that Shin Dong-Yup doesn’t take outdoor shows because he is lazy. What do you say to that?

No, that’s absolutely a joke. Everybody has their own talents and mine are all suited for indoors.

What is most important to you?

Do the things I can do and in a funny and mature manner. I used to work like I was on a battlefield, sleeping on couches waiting for the scripts, just to edit it again and again. There were pros and cons, but it didn’t feel quite right. I decided to relax and relish work instead of impatiently waiting for visible outcomes. Now I am freed from such obsessions.

People say you’re making your way up once again. Have there been a lot of offers?

There certainly have been a lot of offers, but I think a program mostly belongs to its production crew. They offer me a project, and I just add my own style to what they’ve created. As for the term “second heyday,” I don’t particularly relate to it. Public attention comes and goes, leaving my role pretty simple. When it comes I appreciate it, and when it goes I work harder. People taking notice of rated-X jokes is not bad, of course, since it’s what I’ve been working on. It’s not the only thing I do, but it’s something the public likes and that’s a good thing.

What do you think would be a perfect X-rated show?

Well, I guess it is like this. We have it, and they know it - but we don’t let it show.