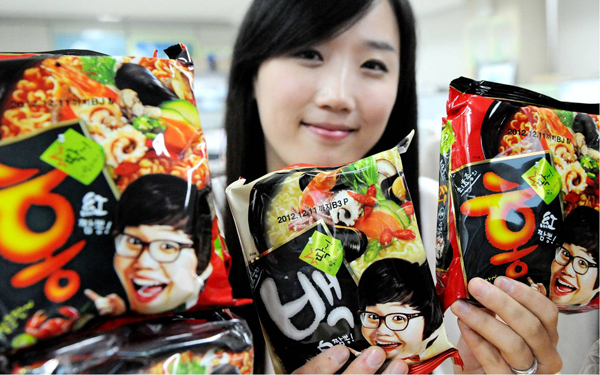 Choi Hyo-jong, a famous comedian, appears on the package of a Homeplus ramen that was released earlier this month. [YONHAP]


The economic outlook is enough to make anyone cry.

But laughter happens to be one of the most buoyant businesses around. And comedians are dominating not only comedy but also commercials and advertisements.

Major broadcasters are riding high with several comedy successes, topped by the comedy program “Gag Concert” broadcast by KBS every Sunday night. It is getting a record high rating of 19.5 percent, proving that comedy works in troubled economic times.

Downhearted consumers seem to want a laugh, and advertisers and the retail industry are adopting comedy as a key marketing strategy.

Comedians are in huge demand for advertisements. Performers from “Gag Concert” have been in 20 since early this year selling all kinds of products from electronics to securities.

“As most people are yearning for jokes and well-known actors, fun marketing is useful in maximizing the advertising effect,” said Kim Kyu-hwan, a TV commercial director. “It is especially effective in persuading consumers to have an intimacy with and a good impression of a brand.”

Comedians come with their own schtick and buzzwords, and they’re a lot cheaper than actors and singers.

Comedians have started their own businesses, launching food product brands with their names.

Park Sung-kwang, a comedian from “Brave Brothers,” a popular group featured on Gag Concert, recently launched a kimchi brand that consumers took to with a passion. All stocks of his “Mother Mother Kimchi” were sold out in two hours when put on sale on the Internet.

Comedian Huh Kyung-hwan, who is known for his sexy physique, has launched a line of chicken breasts under the name Huh Chicken. After its success online, Huh is expanding the business to retail shops.

Since 2010, 7-Eleven has been selling lunch boxes, ramen and snacks promoted by comedian Lee Su-geun, who fashions himself as a gourmet. Homeplus, a major discount retailer, chose Choi Hyo-jong, another Gag Concert performer, to promote noodles.

“In an economic recession, comedians who can provide laughs and entertain consumers will continue to grow demand,” an industry insider said.