Disappointed by the botched vote to oust two incumbent lawmakers, a smaller faction of the minor opposition Unified Progressive Party is considering a split, following the exodus of party members on Thursday. 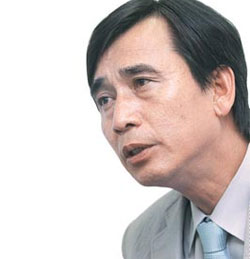 The faction, composed of former members of the People’s Participation Party founded by Rhyu Si-min, a popular liberal icon, yesterday held a meeting to discuss whether to leave the party.

“We should review the first question: Does the UPP have any more ways to reform the party to meet people’s expectations?” Rhyu said in a statement issued yesterday.

At least 1,000 members left the party on Friday, frustrated by the vote on Thursday that failed to expel the two lawmakers, Lee Seok-gi and Kim Jae-yeon, who were elected in the March proportional primary. Despite public demand that the primary was apparently rigged and all scandal-mired candidates, including Lee and Kim, should step down, the largest faction, which is backing the two lawmakers, say that the vote-rigging allegation is a political attack against them. Rhyu cast doubt on the probability of forming an alliance with the main opposition party.

“The main opposition Democratic United Party won’t form an alliance with us [for the presidential election],” Rhyu said. “Our strategy to defeat the ruling party through the alliance has been scrapped.”

“Most of the members already gave up on party reform,” Cheon Ho-seon, a supreme councilor of the party, told reporters yesterday. “We can’t reform the party through cooperating with the largest faction.”

The federation, which occupies the party’s largest dues-paying members, has previously said that they will leave the party unless Lee and Kim step down. The trade unions will hold a meeting next month to determine the defection.

Meanwhile, a local court in Seoul issued an arrest warrant on Saturday for a UPP member from the rival DLP faction. The member surnamed Park, 24, was accused of assaulting a former interim leader at a party conference in May in protest of the interim leadership’s claim that the March primary was rigged.