Hot spell is expected to last until mid-August

Hot spell is expected to last until mid-August 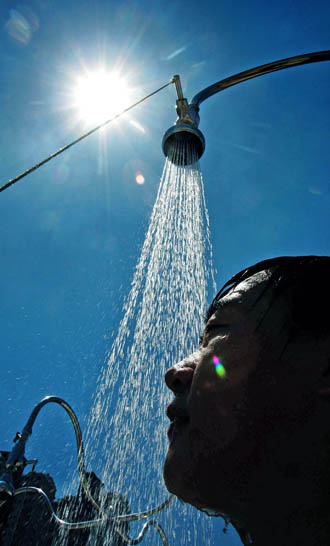 A man cools himself under a shower at a swimming pool at Hangang Park yesterday. By Yang Yeong-seok

Seoulites sweltered through the summer heat over the weekend.

But some suffered more than others thanks to the so-called urban heat island effect.

Concrete, asphalt and the walls of buildings absorb heat and radiate it out, raising the temperature in the area. That’s why, according to the Korea Meteorological Administration, the average high from July 23 to 28 in Jungnang District areas was a steamy 34.2 degrees Celsius (93.6 Farenheit).

In comparison, the average high for Jongno District was 29.9 degrees Celsius, the only district in Seoul showing an average below 30 degrees.

Average highs in sections located along mountains, Gwanak and Eunpyeong districts, for instance, hovered in the 30-31 degrees Celsius range. Seocho, Gangnam and Songpa districts in southern Seoul, filled with towering office buildings, all had average highs for the six days reaching beyond 33 degrees Celsius.

The forecast is for the heat to last through mid-August.

The ongoing heat has reached the point that the elderly are at risk, the JoongAng Ilbo reported.

The Korea Centers for Disease Control and Prevention reports that heat has led to four deaths since June 1, including an elderly husband and wife who collapsed in their vinyl greenhouse in Chilgok County, North Geyongsang. The center said a total of 286 patients have sought medical treatment for exposure to excessive heath over the period.

The Korean Environment Institute says the elderly are at risk once a city’s temperature goes beyond a certain threshold, and it identifies different thresholds for different cities. Seoul’s, for example, is with 27.8 degrees Celsius while Busan’s is at 26.5. It is especially dangerous when temperatures stay over that point for two consecutive days.

Daegu, widely known for its simmering summers, has had six days in a row - from July 23 to 28 -with the average temperature beyond its threshold of 27.9 degrees Celsius. Daejeon also experienced nine consecutive days with the mercury over its threshold of 26.2 degrees Celsius. All six major cities, including Seoul, have had temperatures over their thresholds since Wednesday. Each degree increase above the threshold temperature results in a 12.75 percent rise in the excess mortality rates in Seoul, the Korean Environment Institute said. With global warming, the institute forecasts Seoul will have 13 days a year over its threshold by 2020. To cool things off, the Seoul Metropolitan Government announced yesterday it would spray water on asphalt roads during the daytime should a heat-wave advisory be issued for the capital by employing 237 sprinkler vehicles. According to the Public Health and Environment Research Institute, such relief efforts could result in as much as a 6.4 and 1.5 degree Celsius drop in temperatures on roads and sidewalks, respectively.