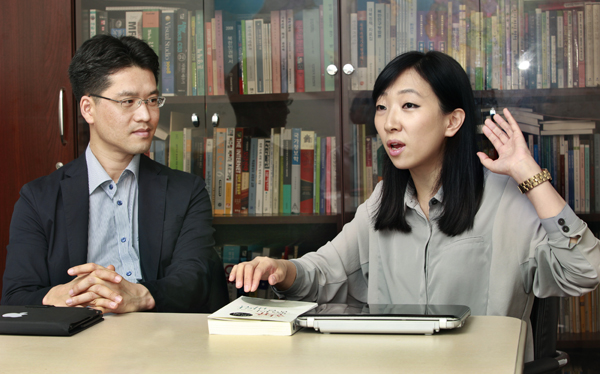 
The Korean Wave is lapping at the shores of the world’s most reclusive country: North Korea.

It’s hard to imagine that people in one of the most impoverished countries in the world are able to access the capitalist South’s dramas, movies, songs and even pornography.

As experts in North Korean studies, the couple has studied how Hallyu has spilled into the North, and how it impacts a public brainwashed by the Kim dynasty’s dictatorial propaganda. 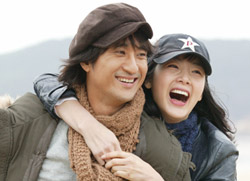 In their recently published book entitled “The New Wind of Change: For the Unification of the Korean Peninsula,” they interviewed 100 North Korean defectors who said they have watched dramas or other videos from the South.

“Viewers vary regardless of their social status. In fact, it’s the higher-class people that smuggle the South Korean videos and sell them to the lower class to earn money, forming an underground organization like a pyramid scheme.”

Park said that among the 100 defectors there were 22 labor workers, 12 office workers, 20 housewives, five government officials, 11 students, three military officers, seven farmers and 20 listed as “other.”

Most of them defected to the South between 2006 and 2011. They all currently live in the South.

“For North Koreans, importing South’s dramas is a cash cow,” Kang said. “A high-ranking official orders a local broker to import them from Chinese brokers who sell pirated dramas or movies along the border.”

“One of the reasons high-ranking government officials smuggle them in is because they can purchase the expensive video clips and get a sufficient amount of electricity to play them and have the information on how to smuggle South’s products safely and how to transport them,” Park added. “Those in the lower class watch them by borrowing them or visiting houses of people who own the videos.”

Park said that most people don’t have enough money to use power for hours and the free electricity provided by the regime is too weak.

Some purchase generators at a local market or use automobile or military tank batteries to power their players.

How they watch them varies, Park said. Most South Korean videos come in the form of DVDs, which are copies made in China. Brokers in China also sell DVD players, which cost about 300,000 won ($260).

“Lately, more and more people in the North have preferred USB sticks to CDs, since they are easier to hide from security guards,” Park said. “Knowing this, the Chinese recently started selling so-called ‘EVD players,’ in which you just insert the USB stick with the video files and it plays right away, so that they can quickly remove the stick when the security guards appear.”

“The EVD player is quite cheap, about 30,000 won, and it is also becoming popular as a marriage gift that a bride gives her groom,” she said.

Park said that people in both Koreas have similar tastes. For instance, “Winter Sonata” in 2004, a love story which was a hit in Japan; “Emperor Wang Gun” in 2000, a drama which depicts the founding of the ancient Goryeo Dynasty; and “My Wife Is a Gangster” in 2001, a film about a female gang boss, were popular in both the North and South.

Park said the price of each disc varies according to location, due to the transportation fees and commissions for brokers.

In Hyesan, in the northern part of the country which borders China, a disc costs 2,000 North Korean won as of 2011, similar to the cost of 1 kilogram (2.2 pounds) of rice at the time.

“The level of punishment for crimes regarding South Korean pop culture also varies,” Park said. “Those charged with massive smuggling of dramas or pornography are mostly sentenced to death, defectors said. Some are dragged to a labor camp or expelled to other regions.”

For this reason, a rental service or a temporary venue flourishes, Park said. Ordinary people who can’t afford to buy the expensive DVD or EVD players pay a certain amount of money to a person who has a TV, player and money for enough electricity, and then gather at the house at a designated time.

“Some people just get together at a certain time in a certain house and watch soap operas or movies together, even if they are strangers,” Park said. “It’s just like going to a movie theater.” Those who run the rental service don’t have a specific shop, she added.

“They just wander around a village and visit each house, ask which episode they want, and provide it.”

Park and Kang believe that the widespread popularity of South Korean culture in the North is apparently a good signal for unification of the two Koreas, as more and more people, especially young women, are learning about the freedom and capitalism depicted in the dramas and movies.

“The trend of North Korean women following the South’s fashion, cosmetics and hair style is apparent,” Park said. “They said they don’t just follow them but feel what freedom means by wearing what they want and appearing the way they want.

“Some women love skinny jeans and brag about them on the street, but government workers find them and slash their jeans so they can’t wear them, just like our policemen cracked down on the long hair of men in South Korea in the early 1970s,” she said.

“Some people say they even dye their hair and mimic the accent of Southern people, but as a result, they are forced to work community service as punishment.

“We met with a North Korean woman who was a hair designer,” she said. “She flew to China and learned the South Korean style from an ethnic Korean there, and came back to the country, attracting a lot of young female customers.”

However, it’s not always good to delve into the culture of the South through the commercial culture, Park said. “There are also many gangster, horror or sexual movies spreading to the regime,” Park said. “After watching them, North Korean defectors told us that they felt the Southern people were violent, dirty, savage and uneducated, and the capitalism is just like what their authorities say, with their propaganda of ‘safe socialism, scary capitalism.’”

Furthermore, many young North Korean women embrace their fantasies of becoming career women or living a rich life in a capitalistic city after watching the unrealistically luxurious lives of rich people and successful women.

“Many female defectors were disappointed when they came to the South, realizing that the reality wasn’t what they imagined,” Park said. “They thought Southern women were mostly highly educated, had decent jobs and were lovers of the good-looking men with gentle manners that they never met in the North.

“However, they came to realize that the capitalist South isn’t heaven, and found many social problems with capitalism, like the gap between the rich and poor, a high unemployment rate and social discrimination against North Korean defectors.”

Despite all these side effects, the couple believed that the Korean Wave would be a “good wave” for the reclusive country, to help them become more open-minded to the outside world.

“The collapse of other communist countries was mostly triggered by high-ranking people,” Kang said. “Some people could just enjoy the Southern culture without giving up their privilege, and the poor might have little energy to incite a revolution.

“Still, we believe there could be those who are intelligent enough to think that something should be changed in the regime,” he said.

“Even if the Hallyu doesn’t directly lead to the reunification of the two Koreas, it is evident that it helps to narrow the ideological gap between the people.”