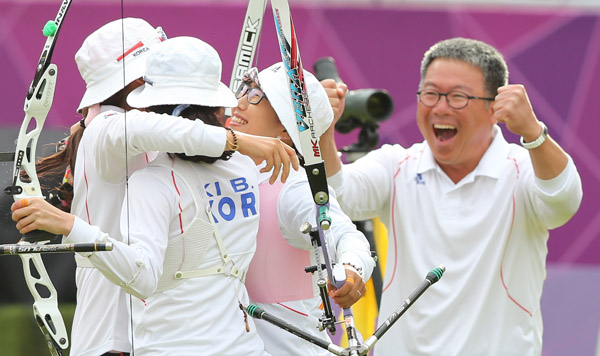 
With one arrow left, Ki Bo-bae needed at least a 9 for the women’s archery team to win gold on Sunday. As the rain poured down on the Lord’s Cricket Ground, she drew back the bow and delivered just that, pulling Korea ahead of China 210-209 to clinch the country’s second gold medal of the London Games.

It was the country’s seventh straight gold medal in the women’s team archery event, which Korea has now won at every Olympics since the 1988 Seoul Games.

The latest victory came after overcoming wet and windy conditions and a resilient China that had challenged Korea in the finals at the 2008 Beijing Olympics. Ki, Lee Sung-jin and Choi Hyeon-ju came from behind to beat the Chinese trio of Cheng Ming, Fang Yuting and Xu Jin.

“I never knew that standing behind the legacy of six-straight triumphs would bring this much pressure,” Ki said. “After we won the gold, I knew it was such an honor.”

The women’s team topped Denmark 206-195 in the quarters and cruised past Japan 221-106 in the semis. But in the finals, the archers were off to a sluggish start when Lee shot a 7, followed by Choi’s 8. Ki then shocked spectators by shooting a 6.

But China failed to capitalize. The trio combined for only 23 to climb ahead by two points.

The Koreans came back strong in the next shot and managed to pull off a near-perfect 9-9-10, while China fell behind with a 7-7-10 after the first end.

In team archery events, three archers each take two shots per end. Teams compete in four ends for a total of 24 arrows.

In the second end, China charged forward with five 9s and a 10, but Korea managed to hold on to a one-point lead with two 10s from Choi. Korea extended the lead to two points after three ends with the score at 156-154.

The two-point difference was maintained until the last three arrows. China closed out the match by scoring straight 9s. Korea’s first archer Lee hit a 9 and Choi squeaked in an 8, making things very interesting for the final shot. Ki needed to hit a 9 or better for the win.

With ice in her veins, Ki, the 2010 Asian Games gold medalist, calmly struck 9 and clinched the gold.

“I knew there wouldn’t be any problem as long as I stuck to my routine,” said Ki, who was competing in her first Olympics. “It’s lucky that it wasn’t a situation where I had to shoot a 10.”

The women’s archery team has been seen as a heavy favorite, but the pressure has been mounting this Olympics more than ever before.

With the male archery team failing to win the gold and settling for bronze on Saturday, only Lee had previous Olympic experience after competing at the 2004 Athens Olympics.

“This gold medal has come at an especially difficult time, compared to the previous team gold medals,” said Jang Young-sool, the head coach of the archery delegation. “I think this would be an opportunity to cement our position and build a basis for long runs in the event.”

Jang let his emotions show when he mentioned Choi, who has been suffering from shoulder pain during the event.

At Friday’s ranking round, Choi finished 21st while Ki and Lee took the first two seeds. But Choi said she remained confident they would win. During the team event, Choi scored 74 points, more than any other archer in the finals.

“I didn’t do well in the individual preliminary round, but I knew it would go well if I could just get my points,” Choi said. “I felt relieved that I was able to help a little in the team event.”