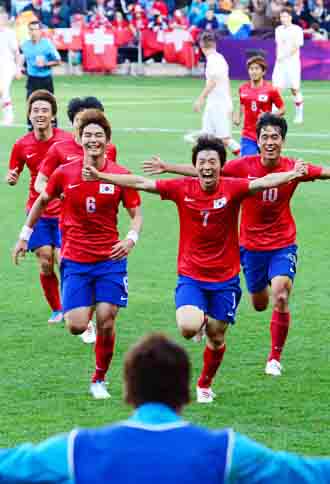 Kim Bo-kyung (7) rushes toward coach Hong Myung-bo after scoring the go-ahead goal in the 64th minute during Korea’s Group B match against Switzerland at the City of Coventry Stadium, yesterday. [NEWSIS]

Just three minutes after Park Chu-young headed in Korea’s first goal of the Olympic tournament to give the young Taegeuk Warriors a 1-0 lead, the Swiss equalized and swung the momentum in their favor. With only 30 minutes left in the match, Korea was on the verge of letting three hard-fought points slip away.

It was a moment when the football squad needed someone to turn the tide, a clutch sharpshooter like Park Ji-sung whose heroics led Korea to the semifinals of the FIFA World Cup.

Kim Bo-kyung once again proved he may be the one to fill the void left by Park. The 22-year-old midfielder scored the go-ahead goal in the 64th minute, helping Korea beat Switzerland 2-1 in their second Group B match held early yesterday morning Korea Standard Time.

“I think scoring not long after allowing the equalizer was helpful for the team,” Kim told reporters after the match.

The win puts Korea in a comfortable position in its bid to advance to the knockout stage. After a scoreless draw against Mexico on Thursday, Korea sits in second place in Group B, trailing Mexico by one in goal differential.

A win or draw in its final group match against Gabon early Thursday morning KST would confirm its spot in the quarterfinals, which Korea has made it to only twice in its Olympic history.

Many believe Kim, who was recently picked up by English side Cardiff City, has the potential to make a significant impact on the tournament. When the Hong Myung-bo squad was struggling in its final Olympic preliminaries against Saudi Arabia in February, trailing 1-0 toward the end of the match, Kim scored in injury time. Coach Hong complimented Kim after Monday’s match, saying he has the ability to score when it matters most.

Like Park Ji-sung, Kim is a midfielder who is lethal with the ball. In the Japanese league, he scored eight goals for Oita Trinita and 15 goals for Cerezo Osaka.

On Friday, Kim confirmed his move from Cerezo Osaka to Cardiff City. Manager Malky Mackay said in a recent interview with Wales Online that Kim is a next-generation big star for Korea who will score many goals for his country.

“Kim is an all-action, attacking midfield player who is left-footed, but he is comfortable playing on the left, right or through the middle,” the manager told Wales Online. “He also loves to strike at goal.”

Kim said he prefers to be a team player, another quality reminiscent of the former Manchester United midfielder.

“As a player in an attacking position, I think it is important to think about how to contribute to the team’s scoring rather than individual scoring,” he said.

Like in the first match against Mexico, Hong started Park Chu-young of Arsenal as the lone forward in the Switzerland match with Koo Ja-cheol of FS Augsburg backing him up as an attacking midfielder. Kim started on the left wing and Nam Tae-hee on the right.

Park blew several goal scoring opportunities including a clear shot on a corner in the 13th minute from Ki Sung-yueng of Celtic. He was able to connect on a cross from Nam 12 minutes after the start of second half.

Swiss striker Innocent Emeghara leveled the match with a header in the 60th minute. Four minutes later, Kim picked up Koo’s cross that bounced off Swiss defenders and converted a left-footed volley.

If Korea loses to Gabon, its Olympic run will depend on the result of the Mexico-Switzerland match that will be held simultaneously.

Two teams will advance from Group B and will play against winners of Group A in the quarterfinals. Group A is led by Great Britain and Senegal with 4 points each, followed by Uruguay at three points and UAE with zero.