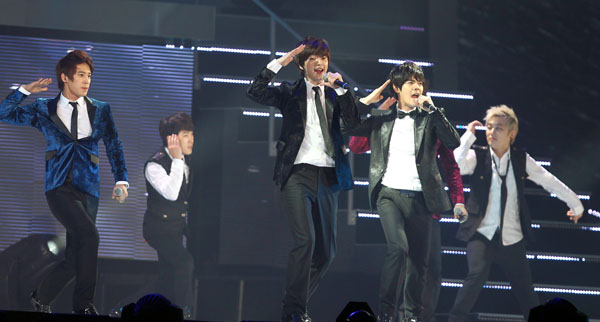 
Seven K-pop groups took on Japan at the Tokyo Dome on July 29.
During the show, Boyfriend, Cho Shin Sung, Infinite, Nu’est, B To B as well Kim Jun-su’s twin brother Juno entertained the Japanese crowds with all of their hits.

One notable absence at K Dream Live No.1 was Cho Shin Sung’s Sungje, who couldn’t perform due to an ankle injury.

Maroo Entertainment announced on July 20 that the boy band member was rehearsing when he felt acute pain and went to the hospital.

The doctor said the singer had torn a ligament in his left ankle and advised him to rest for four weeks.

“I’m so sorry to be a pain and I promise to keep all my promises to fans by going ahead with the group’s plans,” said Sungje ahead of the concert.

But his agency had a different agenda as it put his recovery before performance.