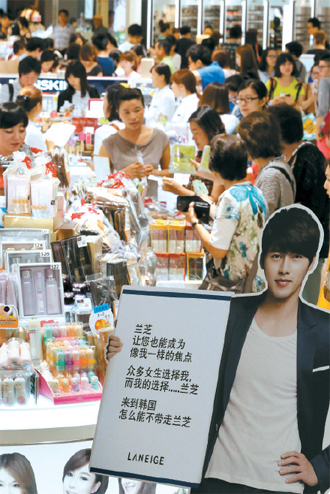 A signboard with the image of actor Song Jung-gi has promotions written in Chinese to advertise a domestic cosmetic brand at Lotte Duty Free yesterday, where Chinese shoppers are now the largest group. By Ahn Sung-sik

While the domestic economy remains sluggish, major duty-free shops posted record sales in the first half of this year, fueled by a sharp rise in spending by foreign visitors, especially from China.

The leading duty-free companies said sales have never been better, with increases of 30 percent over a year earlier.

Shilla Duty Free said its sales for the first half of the year reached over 905.9 billion won ($796.04 million), up 39.2 percent on year. Its operating profit hit 60.1 billion won, four times the 15.2 billion won earned in the same period last year.

Lotte Duty Free also posted record sales in the first half. Lotte said its Seoul branch, which accounted for a third of all its profits last year, saw sales increase 33 percent over the same period last year.

The stores had a record number of Chinese shoppers, surpassing Japanese for the first time.

According to Shilla, Chinese accounted for 52.6 percent of the shoppers compared to 33.6 percent for Japanese. Lotte also saw Chinese customers exceed Japanese for the first time in April.

The number of Chinese tourists that visited the Jeju Island branch of major duty-free shops in the first half was 120,000, contributing to a doubling of sales at Jeju stores this year.

“The number of Chinese travelers increases by close to 100 percent every year, and in the latter half, when the policy to simplify visas is carried out, it is expected to surge even more,” said a staffer at Lotte Duty Free.

Shilla and Lotte plan to ramp up promotional activities in China and expand benefits for shoppers using the UnionPay card, the main means of payment for Chinese.