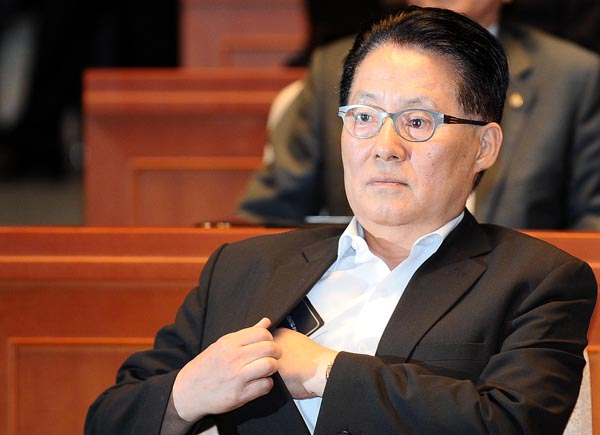 Representative Park Jie-won, floor leader of the main opposition Democratic United Party, attends a lawmakers’ meeting held in the National Assembly yesterday after the prosecution sought an arrest warrant for him. [NEWSIS]


The prosecution yesterday asked a local court to issue a warrant to arrest Representative Park Jie-won, floor leader of the Democratic United Party, to question him about his alleged involvement in the savings banks bribery scandal.

Following the move, the DUP held a lawmakers’ meeting and decided to use all of its power to protect Park, vowing to stop a motion to allow the arrest of its floor leader. Law enforcement authorities are required to obtain the legislature’s approval to arrest a lawmaker when the National Assembly is in session.

The voting is expected to take place on Thursday. The ruling Saenuri Party said it would do its best to pass the motion, as it already experienced serious repercussions after a similar motion to allow detention of one of its lawmakers was voted down earlier this month.

The joint investigation team under the Supreme Prosecutors’ Office has tried to question Park over suspicion that he had received about 100 million won ($88,000) in bribes from two savings banks in return for his political influence.

The 70-year-old political powerhouse, however, turned down the request three times, arguing that the probe was a political attack against him and the largest opposition party before the presidential election.

Announcing that it has no other way to question Park except for forcibly taking him into custody, the prosecution yesterday took the legal step it warned it would take.

Before issuing the warrant, the Seoul Central District Court will ask the National Assembly to approve Park’s arrest. The court’s request will be submitted to the legislature tomorrow after it goes through the Supreme Prosecutors’ Office, the Ministry of Justice and the Prime Minister’s Office and then the Blue House.

The prosecution was determined to question Park by taking him into custody. “If the motion is voted down, we will suspend the indictment and apply for another warrant immediately after the legislature ends its July session on Friday,” said a prosecution source.

And now it all comes down to the simple question of math by counting the number of lawmakers.

If the DUP participates in the voting, the Saenuri Party needs to make sure all of its 149 lawmakers are present and support the motion. Even if it secures support from five lawmakers of the conservative minority Forward Unification Party and three conservative independent lawmakers, the motion could easily be voted down if only a handful of the Saenuri lawmakers vote against it.

If the DUP, which has 128 lawmakers, decides to boycott the vote, the Saenuri Party alone cannot open a voting session, and it needs cooperation from the Forward Unification Party and the independent lawmakers.