Bullet train shuts down for hour in torrid tunnel

Bullet train shuts down for hour in torrid tunnel 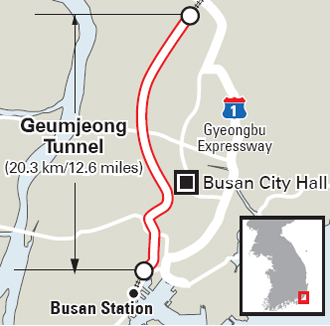 BUSAN - The cause of the breakdown of a KTX bullet train that stopped inside Geumjeong Tunnel last week was the malfunction of an engine block, the Korea Railroad Corporation, or Korail, said yesterday.

On Friday, the No. 133 KTX train from Seoul bound for Busan stopped inside the Geumjeong Tunnel, the longest tunnel in the country, at 3:42 p.m.. Some 560 passengers were stuck inside a train without air conditioning under sweltering heat for about an hour.

Due to the high temperature, some passengers showed difficulty breathing, but no passengers fell seriously ill. The air temperature for Busan on Friday between 3 and 4 p.m. was 31.5 degrees Celsius (88.7 degrees Fahrenheit).

During a press briefing yesterday, a Korail spokesperson said engineers of the No. 133 found that an engine block system that controls the train’s engines and transformers failed 10 minutes after the train left Seoul Station, but the engineers decided to operate the train normally because there was a backup engine.

The backup, however, also broke down about five minutes before the train arrived at Busan Station. The Ministry of Land, Transport and Maritime Affairs, the supervisory office of Korail, said it will send safety supervisory officials to the tunnel to investigate the accident.

“There was no problem with operating the train normally,” a spokesman of Korail told reporters during the press briefing. “Two engine blocks are installed in each train. If one breaks down, the second engine block starts operating automatically, but the backup somehow stopped working.”

Korail, however, came under fire for poorly managing the problem. The ministry said that the situation was reported to emergency services via 119 at 4:18 p.m., which is about 36 minutes after the shutdown occurred, but the report was made by a passenger, not Korail staff.

“They [Korail] only told passengers that there was a technical problem with the train,” a passenger said angrily. “The fear reached its highest level when the lights on the entire train went off, but they just said it was necessary for safety.”

As it heated up inside the train, children began crying and some passengers sent messages to the Twitter pages of fire and police stations. “Elderly people and women are about to pass out, please help!” a message read. Some passengers forced open the train doors by hand to get more air.

“This is unacceptable,” a spokesman for the Transport Ministry said.

“It is a miracle that all 560 passengers are safe though they were stuck inside the train under scorching heat. If a fire broke out from the overheated engine at the time, a tragic disaster might have occurred.”

“The tunnel particularly has many curved and inclining sections,” a spokesman for Korail said. “It strains the train’s operating system.”