Judokas stumble on day 4 of Games

Judokas stumble on day 4 of Games 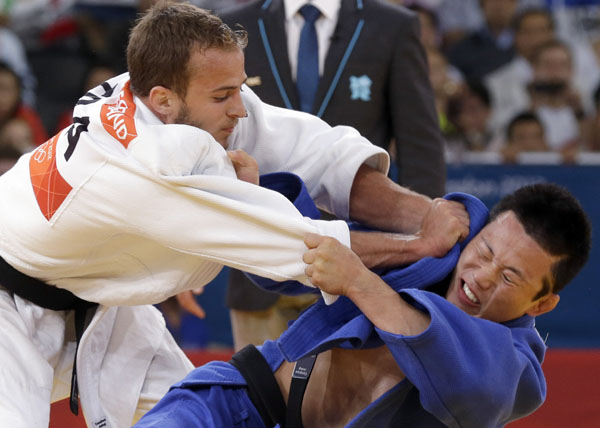 Ugo Legrand of France, left, competes against Wang Ki-chun of Korea during their bronze medal match in the men’s 73-kilogram judo competition on Monday in London. [AP/YONHAP]


Park Tae-hwan added another silver medal, but the country’s overall performance went flat on day four of the London Games.

Medal hopeful Wang Ki-chun in men’s judo was marred by injuries and lost to Ugo Legrand of France in the battle for bronze. Wang, the 23-year-old who is ranked No. 1 in the below-73-kilogram division of men’s judo, lost to Russia’s Mansur Isaev in the semifinal.

The Korean injured his right elbow during the round of 32 against Kazakhstan’s Rinat Ibragimov. Wang would eventually win the match in overtime, but the injuries didn’t end there.

During the semifinal bout against Isaev, it was reported that Wang injured his left elbow as well.

At the 2008 Beijing Olympics, Wang, a two-time world champion, broke his ribs in the quarterfinals but fought his way to the finals. There he lost to Elnur Mammadli of Azerbaijan in just 13 seconds

Other stars in the judo event also failed to bring home medals. In women’s 57-kilogram event, Kim Jan-di, the 2010 Asian Games silver medalist, was eliminated in the round of 16 after a fight with Giulia Quintavalle of Italy.

In team sports, the Korean women managed to advance in handball and volleyball. The handball team edged Denmark 25-24 for its second straight victory in Group B action. This was Korea’s first win over Denmark in the Olympics in five matches. The team defeated Spain in its opener last week. Norway, the winner of the 2011 world championships, is the next opponent. The match is set for 5:30 p.m. today Korea Standard Time.