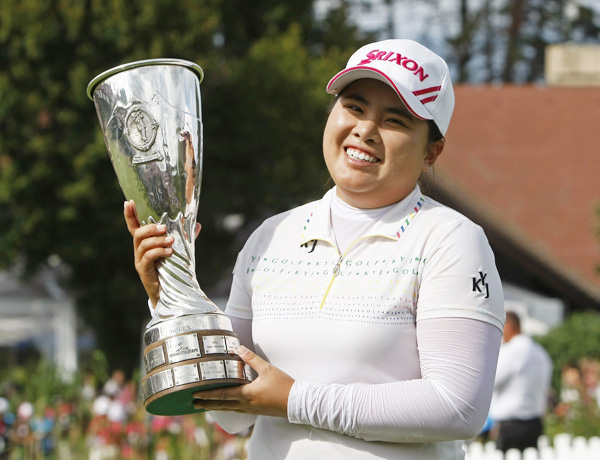 “It feels great. It was four years ago but it feels longer than that,’’ Park said. “I finished the round with some really strong putting today.’’

The 24-year-old Park made birdies on the last three holes to coast home.

“After yesterday, a lot of players were in contention so I knew I had to shoot a good score out there,’’ Park said. “The greens were a lot quicker than the last five years. I like the fast greens, so I think that really suited me as well.’’

Lewis, who shared the overnight lead with Park, made a run at the end, but her long putt for eagle on the 18th came too late.

“I actually played really good. I had probably four or five putts that I thought I made and just lipped out,’’ said Lewis, who was runner-up last year to Japan’s Ai Miyazato, also by two shots. “It’s huge for me, because I didn’t play well yesterday, didn’t play my best today, and still I was right there.’’

China’s Shanshan Feng made a late charge as well, shooting a 66 that also included an eagle on the 18th.

She finished tied for fourth at 14 under with Korean amateur Kim Hyo-joo, 68, and American Natalie Gulbis, 68.

Feng’s shot of the day drew a roar from the grandstand on the last hole when she chipped out of the bunker, and the ball looped around in a semi-circle from right to left then dropped in for an eagle.

“It was a flat lie and I had room to let the ball roll. [But] under pressure I think that’s a very good shot,’’ Feng said. “It’s my best round of the year.’’

The pressure was on Park to respond, and she did, sinking a birdie on No. 16 to move to 15 under.

Lewis, who had been seeking her third LPGA Tour title of the year, fell behind with a poor run in the middle of her round - she went eight holes without a birdie, including a bogey on No. 14.

This is the last Evian Masters before the event becomes the Evian Championship and the fifth women’s major in September 2013.

Lewis, who tied the course record with a 63 on Friday, missed a birdie on the fourth hole as her shot drifted left. After missing a good birdie chance on the fifth, she hunched forward in frustration with hands on her thighs.

Park birdied the ninth to take the lead at the turn and then moved to 14 under with another birdie on No. 10.