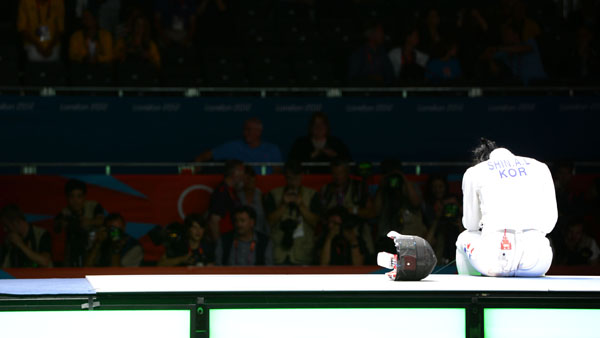 
Swimmer Park Tae-hwan wiped away tears with a silver medal in hand after officials overturned a temporary disqualification to allow him to swim in the finals. Judoka Cho Jun-ho stood on the mat in disbelief when judges raised white flags, reversing their decision and naming Masashi Ebinuma of Japan the victor.

Judoka Cho Jun-ho, left, reacts after judges reverse their initial decision and named his Japanese opponent the victor. Park Tae-hwan, right, stays in the pool after he was initially disqualified during the preliminaries on Saturday. After the call was reversed, Park won the silver medal in the 400-meter freestyle. [YONHAP]


But the most shocking display of controversial judging at the Olympics came yesterday when fencer Shin A-lam sat down in the piste in tears, waiting for the judges’ disputed decision for one hour as the crowd of 7,000 uncomfortably looked on.

Heading into the Games, analysts suggested that Korea’s worst enemy under the tense pressure of the Olympics would be the athletes themselves. Yet a series of mishaps and controversial decisions from the judges have ended medal hopes only four days into the London Games.

The match was tied at 5-5 in the sudden death phase and Shin would have advanced to the final thanks to the priority she was awarded before the duel. But the one second left did not elapse while Shin defended against Heidemann’s attacks three times.

Heidemann’s fourth hit worked, and the time on the electronic board still read one second. Her coach Shim Jae-sung lodged a complaint with the match officials about the clock management while Shin refused to leave the arena for over an hour, wiping away tears.

After lengthy discussions between technical directors and then officials from the International Fencing Federation, the call stood.

“I didn’t know one second could last that long,” Shin told reporters after losing the third-place match to China’s Sun Yujie. “I felt like sitting on the piste lasted as long as my preparations for the Olympics.”

AFP picked Shin’s case as one of the five “great Olympic judging rows.” Korea is no stranger to controversial decisions. Yang Tae-young was robbed of the gold medal in the men’s all-around event at the Athens Games due to a scoring error.

Senior officials leading Team Korea said that although some misjudgments may have been made, Korea should accept the results.

Park Yong-sung, the chairman of the Korean Olympic Committee, cited the Socrates maxim: “The law is harsh, but it is still the law.”

Still, the KOC said it will try correcting the wrongs and prevent similar things from happening at future Olympics.

“As far as I know, a task force accompanying the national Olympic team in London is coming up with countermeasures,” a KOC official in Seoul said.

Some angry fans urged through social network services that Team Korea should boycott the Olympics for unfair decisions.

“When one second stopped [ticking], the Olympics also stopped. We shall boycott the Olympics from now on,” said one Korean via Twitter.

Another said that Korea should host another Olympics and earn 50 gold medals, twisting an old suspicion that Korea bribed many officials to produce results in their favor during the 1988 Seoul Olympics. Korea won 12 gold medals at the Seoul Games to finish fourth.