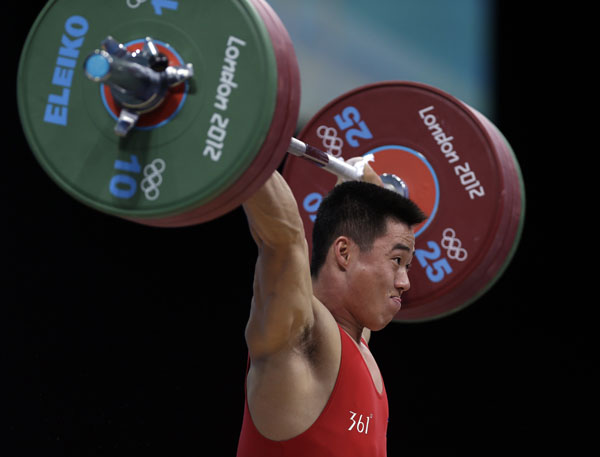 
North Korea is making a surprise run in the early phase of the London Olympics, winning three gold medals and tied for the third most with France as of yesterday.

North Korea was ranked fourth in the overall medal standings with one bronze in addition to the golds. South Korea is sixth, with two golds, one silver and one bronze.

North Korea’s latest gold medal came from weight lifter Kim Un-guk who won and set a world record in the men’s under-62-kilogram division. The 23-year-old lifted a total of 327 kilograms - 153 in the snatch and 174 in the clean and jerk - 1 kilogram more than previous record-holder Zhang Jie of China.

With Kim’s gold, North Korea exceeded its performance four years ago in Beijing, where it finished 33rd with two gold, one silver and three bronze medals.

Among North Korea’s four medals, three are in weight lifting.

Ryang Chun-hwa delivered the country’s first medal on Saturday (KST) after winning bronze in the women’s under-48-kilogram division weight lifting. She lifted a total of 192 kilograms - 80 in snatch and 112 in the clean and jerk.

North Korea’s gold rush peaked with two first-place finishes on Sunday, the first time that has happened since the country began competing at the Olympics in 1972 Munich Games.

An Kum-ae, who collected silver in judo at the 2008 Beijing Olympics, delivered the country’s first gold medal in London. She beat Cuba’s Yanet Bermoy Acosta in the women’s under-52-kilogram division.

It was also country’s first gold medal in judo since the 1996 Atlanta Olympics, when 16-year-old Kye Sun-hi won the gold. Kye was An’s coach for the London Games.

With one minute and 45 seconds remaining in the extra time golden score period, the 32-year-old landed a yuko throw. Before the final, An, who is ranked 25th in the world, delivered upset top-seeded world champion Misato Nakamura of Japan in the quarterfinals before edging Italy’s Rosalba Forciniti.

Five hours later, it was Om Yun-chol who again stunned the world by winning gold.

The four-foot-nine frame weight lifter, who got to the final stage by finishing fifth at the qualifying round, won the men’s under-56-kilogram category after lifting a total of 293 kilograms. He cleared 125 kilograms in snatch and set an Olympic record in clean and jerk with 168 kilograms.

Sports pundits say that with new regime of Kim Jong-un, the nation is eager to perform well on the Olympic stage and North Korean athletes are showing more determination than ever.

In addition, the country for the first time sent six television producers to London to broadcast the event.

In London, the 56 North Korean athletes competing in 11 events have a chance to exceed that.

The nation has a good chance to medal in men’s wrestling, women’s boxing and archery.