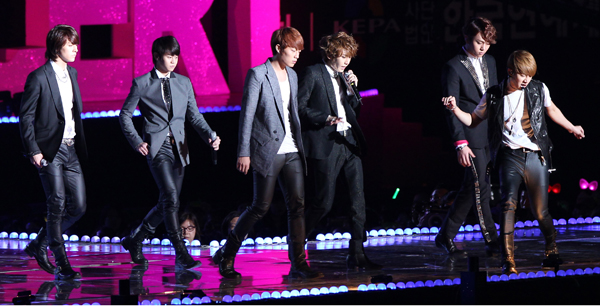 
Boy group Beast will be turned into cartoon characters by famed cartoonist Kim Hye-jin, who goes by the pen name Jenna.

“The Beast” cartoon has been three years in the making and will revolve around the band members’ characters as they turn into action heroes to save the world.

The cartoon is geared toward both the domestic and international markets and will be made into an animation and games, too. The first of the six-part fantasy action cartoon will be published on Aug. 22.

Meanwhile, the K-pop band has been busy of late promoting its new EP.

On July 26, the group gathered more than 4,000 fans at Gwanghwamun Square for a live performance and recording of its latest single “Beautiful Night.”

Fans from Korea and abroad queued for up to 12 hours to catch a glimpse of the Hallyu boy band.