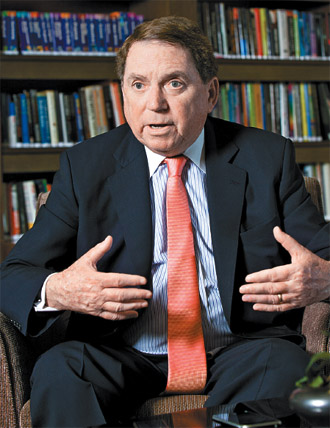 Ambassador Thomas Hubbard, chairman of the Korea Society, called on China to cooperate with South Korea and the United States in dealing with a broad range of problems, issues and challenges that North Korea poses, such as how they value human rights.

“China provides life support to North Korea and without China’s support, things will be very difficult for North Korea,” Hubbard said in an interview with the Korea JoongAng Daily last week.

“We would like China to join with us in persuading North Korea not only to open up its economy and improve its human rights record, but also to begin to eliminate the nuclear weapons programs and cease its provocations in the South.” Hubbard, a diplomat and former U.S. Ambassador to South Korea from 2001 to 2004, was in Seoul last week as part of the Korea Society’s regular visit to meet with the American non-profit organization’s Korean friends and supporters.

The Korea Society - founded in 1957 by a group of prominent Americans - is dedicated to promoting greater awareness and understanding between Americans and Koreans from diverse areas of public policy, business and intercultural relations.

On his recent four-day visit, Hubbard met with a range of business leaders, including senior executives of Hyundai Motor and Samsung, as well as some government officials, including the vice minister of foreign affairs.

“There will be a leadership transition in China,” Hubbard said. “But the basic regime led by the Chinese Communist Party will remain unchanged and we hope the new leadership will cooperate in dealing with North Korea, crossing a range of issues.”

Q. What direction do you think China and North Korea are heading in with regard to policy matters?

There have been reports in the South that North Korea is trying to open up under its new leader, Kim Jong-un. Is it a good sign for South Korea and the U.S.?

We don’t know yet. We don’t know where this new leader of North Korea is headed. I think most of us at this stage are pessimistic that the North Koreans will give up their nuclear weapons in the foreseeable future. We’d like to see that but it’s hard to be optimistic about that. There seem to be some indications that there may be more emphasis on economics with the new leader in place in North Korea. There seems to be some efforts to enhance the role of the Communist Party or the People’s Party over the role of the military but I think we’ve seen mixed signals so far and we’ll have to see how this all plays out.

Some South Korean experts suggest that if South Korea can make a leadership change from the current right wing to the left wing and if U.S. President Obama keeps his seat in the White House, it will be the best scenario for handling North Korean issues. How do you foresee some upcoming changes?

It’s a historical fact that we made the most progress in engagement with North Korea when we had President Clinton in the U.S. and President Kim Dae-jung in South Korea. But the progress that we made during that period proved to be short-lived. It didn’t last. And I would argue that the reason that progress didn’t continue is not because the governments changed in the U.S. and South Korea, but because North Korea did not fulfill all of the commitments that it had made during the process of the “sunshine policy” in South Korea and President Clinton’s engagement policy toward North Korea, of which I was a part. (President Kim Dae-jung had promoted the sunshine policy that engaged the North with economic assistance.) I’m less optimistic about North Korea now than I was then. Our two administrations now have both adopted a tougher posture vis-a-vis North Korea partly because we’ve had a bitter experience in the past. But the fact is that even though they came from different sides of the political spectrum, President Obama and President Lee Myung-bak have developed a wonderful relationship and they have become very close and I can’t think of a time when our relationship has been closer than it is now. I also think it will continue regardless of who wins the election in the U.S. and South Korea. We hope for a change in North Korea but we are somewhat less optimistic than we were back in that time of the sunshine policy.

I believe it was the right thing to do at the time. But you just need to look at what has happened over the past few years to think that it wasn’t fully successful.

What do you think is the ideal policy South Korea and the U.S. should apply to the North?

In the case of South Korea, only South Koreans can decide how to deal with North Korea themselves. I think the U.S. will continue very much to follow South Korea’s lead on these issues. That has been the hallmark of President Obama’s North Korean policy: Very close consultation with South Korea and recognizing that South Korea must be in the forefront of any developments on the peninsula.