Free video-to-mobile goes into the black

Free video-to-mobile goes into the black 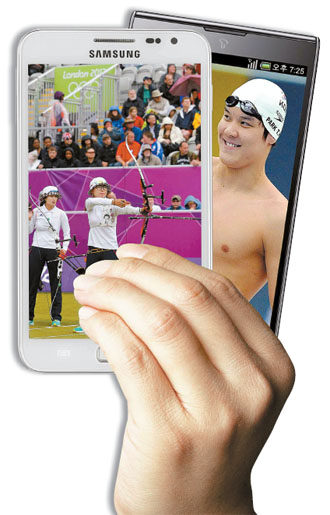 After a promising start seven years ago, two types of digital multimedia broadcasting (DMB) - which enable handheld device owners to watch TV on the road - are facing contrasting destinies.

Whereas operators of the free terrestrial DMB, based on over-the-air signals, are enjoying unprecedented prosperity, satellite DMB service - which charged people for programs - is set to shut down at the end of this month amid ever-increasing debts. Satellite DMB is based on videos beamed from a communication satellite.

Recent data from the Korea Communications Commission, successor to the Ministry of Information and Communication, show that terrestrial DMB service operators have “almost offset accumulated debt by increased revenue” in the fiscal year of 2011.

DMB is the video you see people watching on the subway, or cab drivers watching on their navigation systems. DMB services give access to major broadcasting channels, cable channels, and dedicated audio and video channels. The content is free. Older phones have DMB functions, and Korean-made smartphones do too. Apple’s iPhone does not.

There are six terrestrial DMB firms in Korea. Two of them, Korea DMB and YTN DMB, are now in the black after beginning services in December 2005. 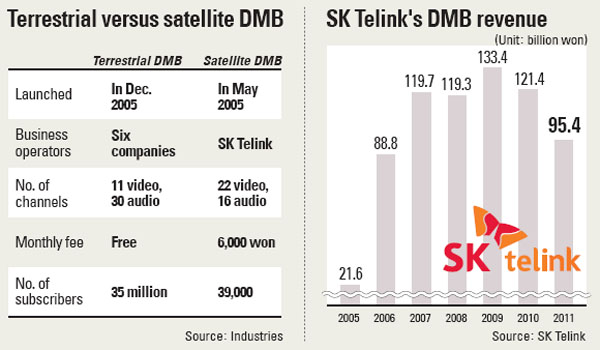 Another operator, U1 Media, halved its operating loss to 1.1 billion won last year on revenues of 5.5 billion won.

The commission cited consistent growth in the number of mobile gadgets supporting terrestrial DMB - smartphones, in particular - as key propellers.

As of late last year, the accumulated number of DMB-enabled devices sold - such as smartphones, automotive navigation systems and portable multimedia players - surpassed 58 million units. The majority of the latest smartphones are equipped with terrestrial DMB applications including the long-term evolution connectivity-enabled version of the popular Galaxy S3, the flagship smartphone from Samsung Electronics.

If gadgets that have been discarded and replaced are taken into account, current subscribers are still estimated at around 35 million, the commission says.

Analysts said the ongoing London Olympics will be a healthy contributor to advertising earnings for the DMB operators. According to a survey from Digieco, a research institute run by mobile carrier KT, 13.7 percent of respondents said they would watch the Olympic games using mobile gadgets.

“The mobile advertising market will more than triple to 200 billion won this year from last thanks to the Olympics,” said Digieco.

The situation for the single satellite DMB operator is a stark contrast with its terrestrial counterparts. Run exclusively by SK Telink, a subsidiary of top mobile carrier SK Telecom, the service has never seen profit in seven years.

As of the end of last year, its accumulated losses were 331.8 billion won and debt totaled 115 billion won. The number of subscribers was a meager 39,000, although it peaked at 2.1 million in September 2009.

Its business was killed by smartphones, which make it possible for owners to watch live broadcasting content free of charge. SK Telink asked for government approval to shut down the business on July 2. The last day of the service is Aug. 30.

Satellite DMB was one of a few industry fields the Information and Communication Ministry handpicked as the country’s IT growth engine seven years ago.

It proudly announced that Korea had launched the “world’s first satellite DMB” and with the government’s support, SK Telecom set up a subsidiary called TU Media (later merged with SK Telink), spent 100.9 billion won on purchasing a satellite devoted to the service, 300 billion won on nationwide network installation and 70 billion won on content.

At the time, it was one of the biggest business investments that any large corporation made after Korea came out of the Asian financial crisis of the late 1990s.

Satellite DMB was doomed from the start: The Information Ministry decided to approve the launch of free terrestrial DMB only seven months after paid satellite DMB service was launched.

“[The failure of satellite DMB] shows how the government should be prudent when it comes to policy decisions,” said Hong Sung-gyu, vice head of the Korea Communications Commission, at a meeting at which the commission discussed terminating the service.