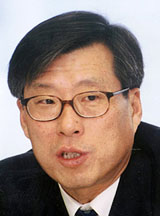 Hyundai Asan, the inter-Korean business promoter, said it received a green light from the government last Saturday after a request last week.

“We are awaiting approval from the Unification Ministry,” said an employee at Hyundai Asan. “We’re going there for a memorial ceremony and we are unsure whether we will be able to meet North Korean authorities for resuming Mount Kumgang tourism.”

Some 10 employees of Hyundai Asan led by its CEO Chang Kyung-chak will visit this Saturday.

Chung’s widow and current Hyundai Group Chairwoman Hyun Jeong-eun won’t join the delegation. Hyun will instead visit Chung’s tomb in Gyeonggi, the company said. The North seized assets at Mount Kumgang, which was jointly operated with Hyundai Asan, and it kicked out the South Korean staff in August 2011.