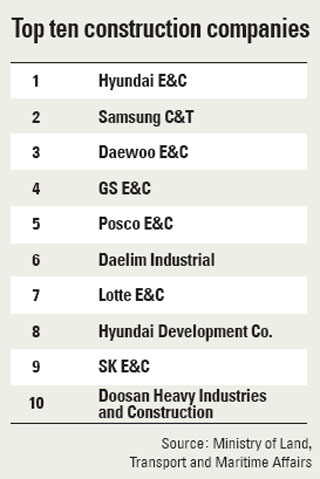 Hyundai Engineering & Construction topped a list of construction companies for the fourth consecutive year after the Ministry of Land, Transport and Maritime Affairs concluded its “construction capability” was the largest in the industry.

According to a ministry report released Monday, Hyundai E&C’s construction capability for this year was 11.71 trillion won ($10.3 billion), which was more than 1 trillion won more than second-place Samsung Construction & Trading.

Hyundai was the leader in both civil engineering and civil engineering building categories with 2.95 trillion won and 6.23 trillion won, respectively. Samsung Engineering topped industrial and environmental facility constructions at 6.1 trillion won, while Samsung Everland was No. 1 in landscaping at 101 billion won. Daewoo E&C climbed up to the No. 3 slot from No. 6, the first time in three years the company was back in top three. After splitting from Kumho Asiana Group, the builder was evaluated poorly in the business management category, but recently paid back debt and upgraded its financial health.

With a good performance in overseas markets, Doosan Heavy Industries & Construction made the top 10 for the first time, pushing its sister company Doosan E&C to No. 12. Samsung Engineering also jumped six ranks to 15th place.

Hoban Construction ranked 32, up 17 steps from last year’s 49, thanks to reduced liabilities and debt.