DUP leader faces up to questioning

DUP leader faces up to questioning 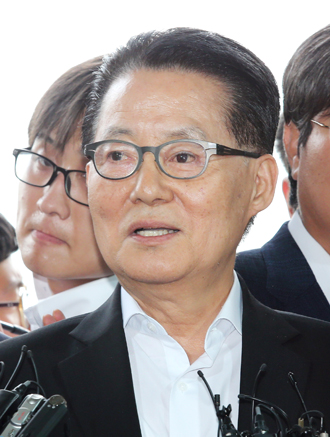 Representative Park Jie-won, floor leader of the Democratic United Party, turns himself in at the Supreme Prosecutors’ Office in Seocho District, southern Seoul, yesterday to face questions about bribery. By Kim Seong-ryong

Representative Park Jie-won, floor leader of the largest opposition Democratic United Party, yesterday appeared before the prosecution to face questioning over graft allegations after weeks of back-and-forth with prosecutors.

Accompanied by his lawyers and aides, Park arrived at the Supreme Prosecutors’ Office at 3 p.m.

Wearing a dark suit and solemn expression, Park briefly addressed the press before entering the building.

Asked why he abruptly changed his mind to show up for questioning, Park said he didn’t want to burden the National Assembly with a vote on the arrest motion against him.

Earlier in the day, the prosecution submitted a request to the legislature to allow Park’s arrest.

With Park’s appearance before the prosecution, the ruling and opposition parties barely managed to avoid a clash in the legislature over the arrest motion against the largest opposition party’s floor leader.

“The DUP was firm about resisting the probe,” Park said. “I also felt it was unfair to be investigated for the false accusations.”

“As a floor leader who led the negotiation to open the current term of the National Assembly, I thought I shouldn’t be an obstacle for the legislature to handle many pending issues,” he said.

“I also didn’t want to burden the ruling and opposition lawmakers, particularly because the arrest motion was submitted to the legislature.”

Park said he will lay bare the truth at the prosecution, but shot down a question about whether or not he would admit the charges.

The prosecution sent three summonses to question him on charges of receiving money from troubled savings banks in return for his political influence to keep their businesses afloat.

Park rejected all of them, saying he would “disembowel himself” if he had to in order to prove his innocence. He refused to say yesterday whether he would exercise his right to remain silent during questioning.

According to DUP sources, Park recruited six attorneys to defend him. Earlier yesterday, the prosecution sent a request to the National Assembly for the arrest of Park.

In the motion, submitted through the Ministry of Justice, the prosecution said Park received a total of 80 million won ($70,765) from 2007 to 2010 over three occasions.

The prosecutors said Park received the money in return for using his position to influence the investigations into Solomon Savings Bank and Bohae Mutual Savings Bank.

The prosecution also provided some details of the charges against Park as it filed the motion.

A DUP source said Park made the last-minute decision to face questioning although he still thinks it is political oppression against him and the party.

At the party leadership meeting on Monday, Park reportedly said he would seriously think about the situation and didn’t want to burden the party.

The ruling Saenuri Party yesterday said it was fortunate that Park made the decision to submit himself to questioning.

“Although it was a long time coming, he made a bold decision in a difficult situation,” said Representative Hong Il-pyo, a party spokesman.

“We hope the ruling and opposition parties will further show efforts to give up the lawmakers’ privilege for the National Assembly’s reform.”