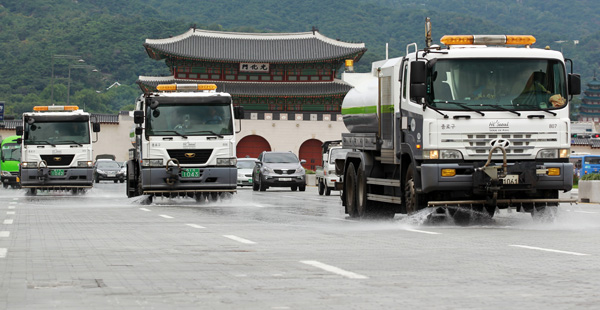 Vehicles spray overheated roads yesterday in Sejongno, northern Seoul, as a heat-wave advisory was issued for the capital. The Seoul Metropolitan Government sprinkles roads from midday to 4 p.m., which can result in decreases of 6.4 to 1.5 degrees Celsius on roads and sidewalks, respectively. [YONHAP]


The heat wave of 2012 is hitting Daegu the hardest, with the mercury over 34 degrees Celsius (93.2 degrees Fahrenheit) for nine days in a row.

People in the city are used to pretty sultry summers, but they have now had their ninth “tropical night” in a row. A “tropical night” is when the temperature stays above 25 degrees Celsius from 6 p.m. to 9 a.m.

In efforts to get out of the heat, people in Daegu are flocking to air-conditioned underground shopping malls downtown or local super supermarkets, which are seeing whole families visit between 8 p.m. and midnight.

The city realized it needed to combat the heat 16 years ago, and it started a give-year project to plant trees. Some 10 million trees were planted, but even they are not enough this year.

Meanwhile in Seoul, the intense heat has led to a steep rise in the number of reported bee stings.

According to the Seoul Metropolitan Fire & Disaster Headquarters Friday, the number of bee-sting victims taken to hospitals by emergency services in the capital has risen by four-fold this year. The statistics are kept for the entire year, from Jan. 1, and as of Friday the number of bee sting victims had reached 70, up from 18 in the corresponding period of last year.

More than two-thirds of the cases, or 52, occurred in July, according to the fire department, which “correlates to the scorching heat that started earlier than normal.”

The fire department said bees are more active in the heat.

Sales of air conditioners have soared in recent weeks. Hi-Mart, the country’s mega electronic retailer, reported yesterday that it had a daily record of 14,775 units sold on Saturday, 46 percent up from the previous daily record of 10,123 units on June 19, 2011.

From July 24 to 30, E-Mart and Lotte Mart’s air conditioner sales more than doubled over the same period last year.

“Strong sales usually occur in April when most products first go on sale,” said Choi Ha-na, who is on the public relations team at Lotte Mart. “Given that July is actually an off-season for air conditioners, the unusual trend is attributable to the scorching heat wave hitting the nation.”

The Korea Meteorological Administration forecasts the heat to continue through the rest of the week except for on Jeju Island and in the southern coastal areas of South Gyeonsang and Jeolla.

The country’s biggest island will be affected by approaching Typhoon Damrey and some southern regions could feel the storm tomorrow. It is expected to move toward mainland China via the Yellow Sea without touching lands in Korea, said the weather agency.