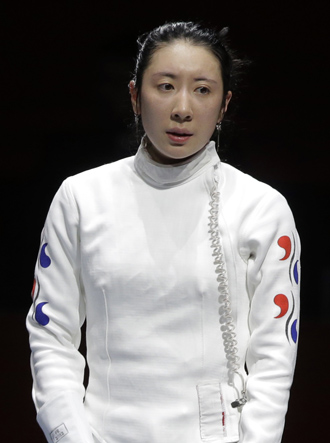 Shin A-lam, the Korean fencer knocked out of the semifinal of the women’s epee event after the judges’ controversial clock management, said yesterday that she still believes the decision was incorrect.

The International Fencing Federation (FIE) said in a statement early yesterday that it would award a special medal honoring her “aspiration to win and respect for the rules.” The Korean officials accepted the offer, but whether Shin will approve of the gesture remains to be seen.

“It does not make me feel better because it’s not an Olympic medal,” Shin told The Daily Mail of Britain. “I don’t accept the result because I believe it was a mistake.”

Shin, 25, lost the semifinal early Tuesday against Germany’s Britta Heidemann, allowing a decisive hit at the last second that seemed to never elapse. Shin, awarded a priority under the rules, would have advanced to the final should the match, tied 5-5, have ended.

The Korean fencer sat on the piste for over an hour after the match, waiting for the results of an appeal by her coaching staff. AFP picked the event as one of the five most controversial judging decisions in Olympic history.

Park Yong-sung, the head of the Korean Olympic Council, held a press conference at the main press center of the London Games yesterday and said the International Fencing Federation thanked Shin for competing in the third-place bout after the disputed call and would offer a special recognition. Park said they would receive the offer.

Park said the federation also acknowledged that there was an issue with the clock management and apologized to Shin. The federation had rejected Korea’s second appeal, saying the technical director’s decision at the semis was final.

“They admitted all the mishaps,” said Kim Guk-hyeon, vice president of the Korean Fencing Federation. “But, there was no rule to figure out a such case in the rule book.”

Kim said Korea will try having discussion with other members of the International Fencing Federation in detail about how to prevent a similar mishap in time management from recurring.