History made with Park’s second silver

History made with Park’s second silver 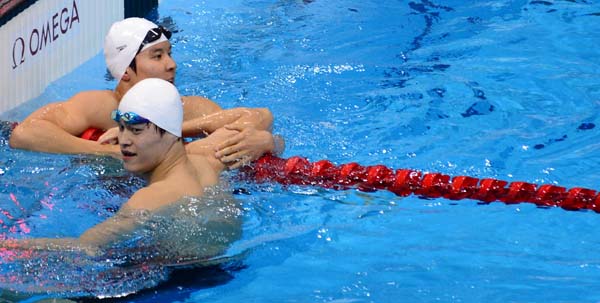 Park Tae-hwan congratulates China’s Sun Yang after they both won silver medals in the men’s 200-meter freestyle swimming final at the Aquatics Centre in London on Monday. [AP/YONHAP]


Park Tae-hwan has had a roller coaster of an Olympics so far, overcoming an overturned disqualification in the 400-meter freestyle to win the silver medal while watching archrival Sun Yang of China celebrate with the gold. In the 200-meter event, he kept his composure and made history with another second place finish.

With yesterday’s silver, Park became the first Korean to repeat winning two medals at two consecutive Olympics. He is the first and only Korean swimmer to win an Olympic medal.

“Although its color is not gold, I am happy that I am able to wear an Olympic medal again,” the 22-year-old Korean swimmer told reporters after finishing second in the 200-meter freestyle final early yesterday morning Korea Standard Time.

His upbeat mood was in stark contrast to his outlook two days ago when Park handed over his title in the 400-meter freestyle to Yang after several hours of confusion when a disqualification decision in the preliminaries was overturned.

In the 200-meter event, the two Asian swimmers finished tied for second behind Yannick Agnel of France in a historically close finish.

Park, who won silver in the 200-meter freestyle at the 2008 Beijing Games, said that he did not expect to win a medal in the same event in London, which some dubbed the “Race of the Century” due to the many star swimmers participating.

Ryan Lochte of the United States, who won gold in the men’s 400-meter individual medley over Michael Phelps on Sunday, swam in the lane next lane to Park while Paul Biedermann of Germany, the world record holder in the 200-meter freestyle, also competed in the final.

Other competitors in the eight-man final were Robbie Renwick of Great Britain, Thomas Fraser-Holmes of Australia and Danila Izotov of Russia.

“There are no regrets today because I did my best,” Park said. “It is an invaluable silver medal to me.”

Park’s time was only 0.13 seconds behind his personal best, which he set when winning a gold medal at the 2010 Guangzhou Asian Games.

Sun also said he liked winning a medal in the short sprint, which he said was not his specialty, according to China’s Xinhua News Agency. He said he had a good feeling finishing together with Park.

“I never expected such a dramatic finish with two swimmers taking silver medals in the same race,” Sun was quoted as saying by Xinhua. “But it is good for me and for Park.”

A Park-Sun duel will be featured once again in the 1,500-meter freestyle slated for early Friday KST.

If Park wins a medal in the event, he will become the first Korean to win three medals at a given Olympic Games. Sun won the 1,500-meter at the Beijing Games while Park did not make to the final.

Meanwhile, Lochte told The Associated Press that he had no regrets about failing to win a medal in the 200-meter freestyle.

“I guess sometimes you win, sometimes you lose. I gave it 110 percent,” he told AP. “There’s probably some things on which I messed up, but you live and learn.”