In 2008 reversal, Kim comes out on top in London

In 2008 reversal, Kim comes out on top in London 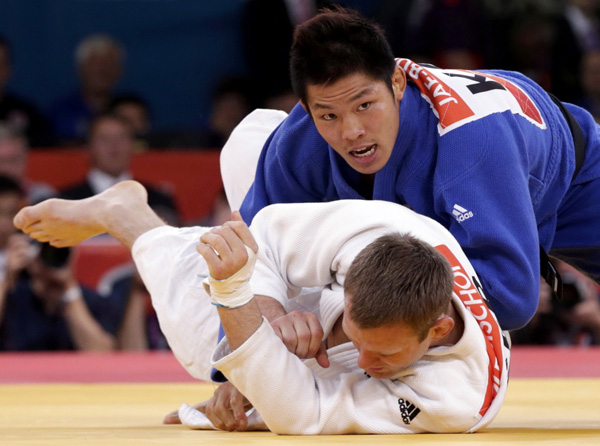 Korea’s Kim Jae-bum scores a yuko to defeat Germany’s Ole Bischof in their gold medal judo match in London. “I think we have the correct champion,” said Bischof, who beat out Kim for the gold four years ago in Beijing. [REUTERS/YONHAP]


Kim Jae-bum knelt on the mat, head down and punching the ground.

His opponent, Ole Bischof of Germany, came toward him and tapped him on the right shoulder.

Four years earlier in the 81-kilogram final in Beijing, the German threw Kim for a yuko and won gold.

This time, it was Kim doing the throwing, for two yukos and Korea’s third gold medal of the London Games.

“He is much stronger and quicker now,” Bischof told The Associated Press. “I think we have the correct champion.”

With the win, the 27-year-old Kim ended a gold medal drought for the Korean Olympic judo team, which went to London with a goal of winning two gold medals.

Wang Ki-chun, the reigning world champion, finished fourth in the men’s 73-kilogram class on Monday and Cho Jun-ho, 23, won a bronze in the 66-kilogram class in repechage matches on Sunday.

It was Kim’s first Olympic gold medal and that which completed his judo grand slam of winning at the Olympics, World Championships, Asian Championships and Asian Games.

Prior to Kim, only one Korean judoka achieved the feat, Lee Won-hee, gold medalist in the 73-kilogram category at the 2004 Athens Olympics. Kim, a two-time world champion and four-time Asian champion, also won the 2010 Guangzhou Asian Games.

Reflecting on his defeat by Bischof in Beijing, Kim told SBS, “Back then it was like whether I would live or die and I lost. Today, it was like I would only die and I won.”

Before his rematch with Bisch on Sunday, he said, he was suffering from several injuries, including a torn ligament in a finger that he sustained a month ago. And he said he couldn’t even run properly until a day before the final.

“He overcame pain that people could not imagine and worked to build muscle to reduce the pains in ligament,” Jung Hoon, his coach, told Ilgan Sports, a daily affiliated with the JoongAng Ilbo.

Kim said the determination to win a gold medal is what carried him through the pain.

“Winning a silver medal and winning a gold medal are different like the heaven and the earth,” he said. “I am so happy and thankful.”

When he began competing as a judoka, Kim competed in the 73-kilogram division, where he did not stand out.

He lost to Lee in a qualification match to field a Korean representative at the 2006 Asian Games in Qatar. And he failed to make it to the 2007 World Championships after losing to Wang.

He raised the his class by a notch in early 2008 and began building victories in the 81-kilogram division, including at the German Open in February 2008.