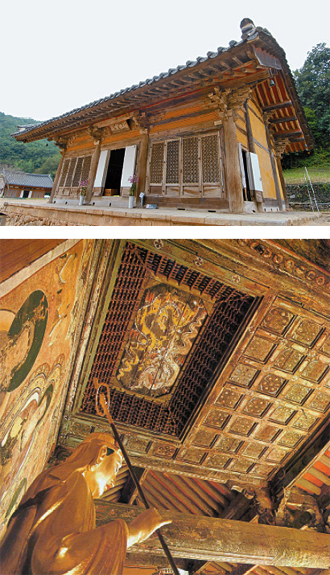 
Originally named Gwaneumsa Temple, Muwisa Temple was built by National Preceptor Wonhyodaesa in the 39th year of King Jinpyeong (617) of the Silla Dynasty. Several repairs and rebuilding have been done and although most of the structures seen today were built from records found in 1983, Geungnakjeon Hall dates to the 12th year of Great King Sejong’s reign in 1430.

The gable-roofed main hall represents the best of Buddhist architecture of the early Joseon era. The eaves are bracketed on supporting pillars that when seen from the front appear thicker and rounder in the middle than their ends. While curved beams were preferred in structures of the Goryeo period (918-1392), most of the beams and girders in this hall are straight. The bracket arms are elaborately carved and the Amitabha Buddha triad used to be enshrined inside the hall with 29 pieces of murals. Today, however, only one murals remains in the temple, and the rest are kept in Bojongak Hall.