Termites eating away at our heritage

Termites eating away at our heritage 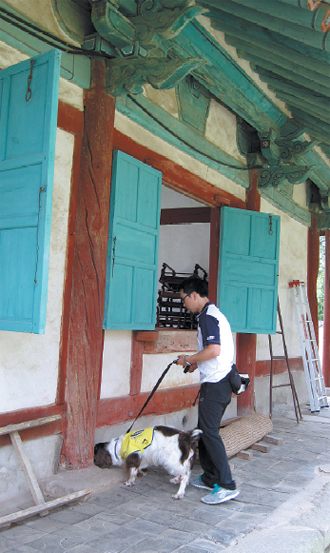 Termite detection dog Boram and trainer Lee Myeong-ho examine the structures of Gyeongju Hywanggyo. Boram has been on the job for four years.

While Koreans are battling steamy hot weather, cultural property preservationists are waging a war of their own: against termites.

With global warming, the temperature on the Korean Peninsula has risen over the past several decades - and because termites thrive in warm, humid environments, the number of them in Korea has surged.

In the 1920s, termites lived only in limited areas of the peninsula, but by 2004 they were found just about everywhere, from the Jeju in the south to Gangwon in the north.

As a result, the damage to wooden cultural properties is getting more serious by the day.

So since last year, the Cultural Heritage Administration has been inspecting wooden national treasures across Korea. Previously, the inspections were done only after damage was reported.

Termites’ favorite habitat is wet wood, which they nibble away at, weakening structures.Provided by National Research Institute of Cultural Heritage


The JoongAng Ilbo recently accompanied CHA personnel who are conducting inspections on 63 wooden national treasures in the Daegu and North Gyeongsang regions. They completed similar work at 57 other sites in the region last year.


Dogs in the temple

On a recent sweltering afternoon, a spaniel and a retriever were running around Gyeongju Hyanggyo in central Gyeongju, North Gyeongsang, sniffing here and there.

Four sweating men were following them.

A hyanggyo is a Confucian temple and school from the Joseon Dynasty. The Gyeongju Hyanggyo - Korea’s National Treasure No.191 - was constructed in 682 and rebuilt in 1600.

It seemed odd to see loose dogs having the run of such an important cultural heritage site, but these two canines are on a mission. Boram, an English springer spaniel and Irum, a Labrador retriever, specialize in finding termites. With their help, inspectors can spray pesticides in the right places.

These termite-detection dogs respond to the smells of the insects’ hormones. They not only find where termites are, but also where they have been.

Boram and Irum used to work as drug and bomb detection dogs, but after a year’s training they went on the trail of termites in 2007.

Boram was sniffing around Daeseongjeon, which houses memorial tablets of Confucius and other sages, when he suddenly stops and stares at one of the pillars. Termite inspector Lee Myung-ho, his trainer, pulls on his collar but Boram won’t budge. It’s Boram’s way of saying that termites are either present or used to be there.

Once detection dogs give such a nod, inspectors use special equipment to find out if termites are actually present. The equipment - called T3i - sends electromagnetic waves into the wood and collects reflected signals.

“With detection dogs, inspection has gotten far easier than before,” Lee says.

Boram and Irum found ten possible termite habitats that afternoon alone. A further examination with the T3i found that the termites had moved elsewhere.

Currently, there are 2,280 national treasures and important folklore materials in Korea (classifications given to tangible heritages like buildings), and 321 of them - or 14.1 percent - are made of wood.

Inspections are currently under way, so authorities don’t yet have precise figures, but they are pretty sure that a majority of them have been damaged by termites in the past or are are currently infested.

Once termites are found to be living in these treasures, authorities cover the structures with tent material and spray pesticides and sterilizers on the structures and nearby soil.

These days, they have gotten more creative and sometimes try to lure the termites away from the site by using food.

“We plan to soon distribute manuals on ways to prevent termite infestations, how to inspect for damage and tips for managing the surrounding environment,” said Kim Myeong-jun, a spokesman for the Cultural Heritage Administration.

Administration officials emphasize that the termite problem is not limited to national treasures. With the hanok boom, more and more people are building traditional wooden houses.

They say it’s time for the country to consider regulations to help control the spread of termites and the damage they cause.

In Japan, for instance, where there are many wooden residential houses, certificates proving that the structures are termite-free must be issued when buying and selling houses.