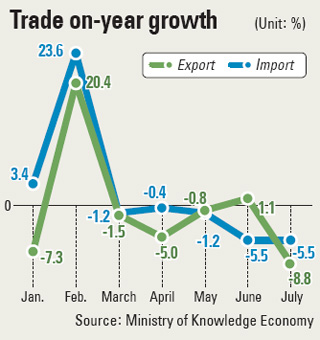 The dizzying deceleration of exports and imports is raising doubts that Korea will reach its minimum target of 3 percent growth for 2012, especially when Korea’s vulnerability to external shocks is at a record level.

Minister of Strategy and Finance Bahk Jae-wan hinted that economic growth for the year could fall below 3 percent because yesterday’s figures were far worse than what the government anticipated. 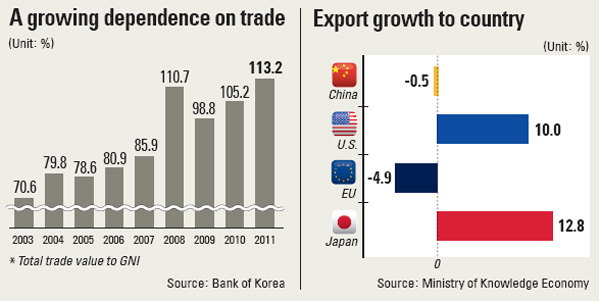 According to the Ministry of Knowledge Economy, exports plummeted 8.8 percent from a year earlier, much faster than it expected. This was the biggest drop since October 2009, when exports shrank 8.5 percent on-year.

Imports in July were 5.5 percent lower than a year earlier.

Although exports shrank faster than imports, the trade balance remained in the black with a $2.7 billion surplus.

That was almost half of June’s $4.9 billion surplus.

The ministry said exports declined mainly due to poor results in shipbuilding, a smaller number of work days due to summer vacations and the weakened global economy.

“Due to economic uncertainties prevailing in Europe, exports to Europe declined,” said Han Jin-hyun, director of the Ministry of Knowledge Economy’s trade and investment division. “Imports from the EU are also decreasing fast as Korea’s domestic market is sluggish.”

Exports to Europe fell 4.9 percent in July. Exports to China dropped only 0.5 percent, but shipments to Oceania, including New Zealand and Australia, fell 52.4 percent.

However, some export markets were still buoyant. Exports to the United States grew 10 percent and to Japan 12.8 percent.

Although smartphones and other handsets by Korean companies expanded their presence in the global market, those companies are increasing their production in overseas factories. In the first quarter of this year, 79.9 percent of all the Korean smartphones sold overseas were made outside of Korea. Only 15.9 percent were produced overseas in 2010.

Only outbound shipments of LCD panels and general machinery marked increases (of 6.7 percent and 3.5 percent, respectively) along with exports of auto parts (1.9 percent).

The ministry said that a drop in exports and even imports at this time of year is not as troubling as in other months.

“Empirically, trade in July grows relatively slower,” said Han. “The drop is more because companies take early vacations before the end of July.”

In the first seven months of this year, accumulated exports dipped 0.8 percent compared to the same period last year.

Korea wasn’t the only economy that saw its outbound shipments contract.

China saw exports between January and May grow 8.7 percent on-year. This is a sharp fall from the 20 percent growth it posted in 2011. The U.S. economy also saw its outbound shipments shrink from 15.8 percent growth in 2011 to 6.8 percent in the first five months of this year.

The situation isn’t getting any better. The International Monetary Fund last month revised its outlook on global trade growth from a 4.1 percent estimate in April to 3.8 percent.

Korea became the ninth country in the world last year to reach that mark. However, as trade shrinks in the wake of the deepening global economic crisis, doubts have been spreading as to whether Asia’s fourth-largest economy could again reach that mark.

“It is not impossible to reach $1 trillion this year as trade in the first half has already hit $620 billion,” Han of the Knowledge Ministry said.

“Exports are slowing, but it’s not at a point where we should be worried as overall trade still continues to post a surplus.”

The Knowledge Ministry may try to stay confident over the direction that Korea’s trade is heading, but Finance Minister Bahk wasn’t too rosy about yesterday’s stats.

In a radio interview yesterday morning, the finance minister said overall economic growth this year may fail to reach the government’s 3 percent target.

“The global economic crisis that started from the fiscal debacle in the euro zone is now spreading to the BRICs [Brazil, Russia, India and China] economies,” Bahk said. “As our economy is heavily dependent on the global economy, we are exposed to such headwinds.”

According to the Bank of Korea, the nation’s dependence on trade has actually reached an all-time high. Last year, Korea’s total overseas trade to gross national income (GNI) was 113.2 percent. This is a significant increase from the previous figure of 105.2 percent posted in 2010.

Korea’s trade dependence has been growing at an exceptional rate in the last decade. After the economy was crushed by the financial crisis of late 1990s, Korean companies have sought out overseas markets as their major profit source. Dependence on trade was further fueled in the post-2008 crisis. Korean companies took the opportunity to increase their global market share in major strategic products, including automobiles, ships and IT goods against competitors from places like Japan. As a result, companies like Samsung now command a dominant presence in the global market in areas such as smartphones.

The government also had a hand in contributing to the greater dependence on trade by keeping the value of the Korean currency weaker compared to the U.S. dollar, which made Korean exports more competitive.

“The government should have acted fast in enhancing the domestic market instead of focusing only on exports,” said an analyst.

To pump up the domestic market, the government has been pitching numerous ideas, but market response has been lukewarm. In fact, consumer expenditure has been falling while companies have been cutting back on investment. That trend affects the nation’s job market as companies hold back on hiring new recruits, while others offer workers early retirements.

The Finance Ministry revised its forecast by lowering its earlier outlook from 3.7 percent to 3.3 percent. The Bank of Korea released a gloomier outlook as it downshifted its projection from 3.5 percent to 3 percent.

Korean manufacturers’ output has been falling. An HSBC report released yesterday said the health of the manufacturing sector was declining at the fastest rate since December 2011.

The purchasing managers’ index (PMI) in July for Korean companies last month was 47.2 points, down from 49.4 in June. The PMI is a composite indicator that shows the health of the manufacturing sector. A reading below 50 signals deterioration, while readings above 50 indicate otherwise.