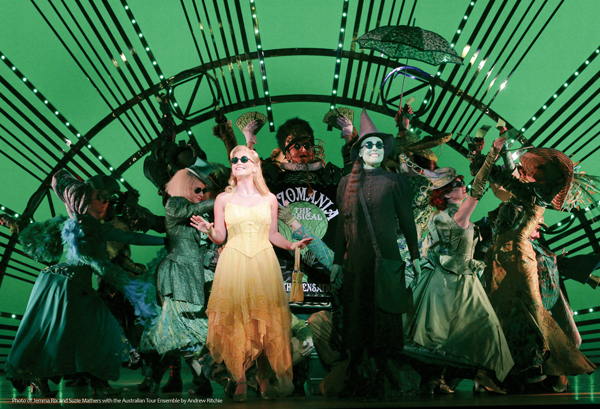 “Wicked,” the musical based on Gregory Maguire’s best-selling novel “Wicked: The Life and Times of the Wicked Witch of the West,” runs through the end of this month at the Blue Square Musical Hall in central Seoul. See THEATER, right. Provided by Andrew Ritchie

Tomorrow and Saturday: The National Theater of Korea is throwing its annual Tropical Night Festival in association with KB Kookmin Bank. The event runs for two nights, with female duo Moon Roof (Okssang Dalbit) and MC Lee Sang-byuk headlining the first. The theater’s intern group Mireu, which includes 28 artists and musicians, diva Lim Jeong-hee and vocalist Kim Kwang-jin of musician duo The Classic will perform on the second night.

Tomorrow and Saturday: The world’s premier electronic music festival comes to Seoul for the first time, bringing with it a knockout lineup of the some of the biggest names in house music.

Saturday’s lineup is packed with the legendary Tiesto, Carl Cox and Friends, the Crystal Method and John Digweed. Ultra Music Festival began as a one-day event in Miami and has grown into one of the world’s largest electronic music festivals. It has expanded to Brazil, Argentina, Spain and Poland.

Aug. 8: Founded in 1997 by art director and violinist Lee Sung-ju, “Joy of Strings” is a nationally recognized instrumental ensemble that will perform a summer concert inspired by the melodic sounds of folk music.

Sept. 8: Following the success of shows in 2010 and 2011, Park Concert will present another elite lineup for this year’s installment. Japan’s Yuhki Kuramoto, Canada’s Steve Barakatt and Korea’s Yiruma have collaborated to present “Piano Paradiso” and the audience will be able to listen to Kuramoto’s “Lake Louise” and “Romance”; Barakatt’s “Rainbow Bridge” and “The Whistler’s Song”; and Yiruma’s “When the Love Falls” featured in the megahit drama “Winter Sonata.” Adriel Kim will conduct the Ditto Orchestra.

Performances are at 4 and 8 p.m. on Tuesdays through Saturdays and 3 and 7 p.m. on Sundays. There are no performances on Mondays.