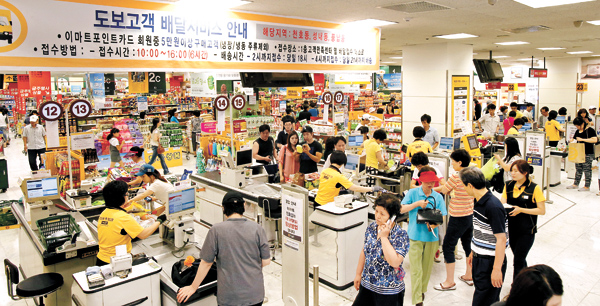 E-Mart’s branch in Cheonho-dong, Gangdong District in southeastern Seoul, resumed business on Sunday June 24 after a Seoul court ruled in favor of the retailer. The government wanted large retailers to shut down on the second and fourth Sundays of each month. By Kang Jung-hyun


The government’s attempt to curb large discount chain stores and super supermarkets (SSM) to help traditional markets and mom-and-pop stores is floundering under court challenges, angering a lot of those mom and pops.

Large discount chains across the country are resuming their businesses on mandatory holidays after a series of courts threw out the national government’s ordinance to force them to take two Sundays off a month. 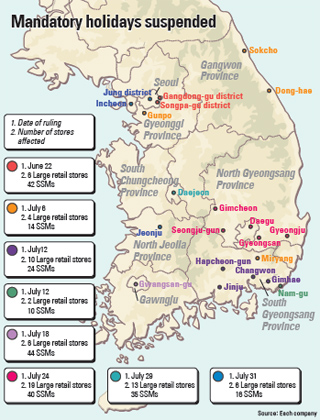 The nation’s three major discount chains, E-Mart, Homeplus and Lotte Mart, shut down 267 of their 368 stores nationwide and four major SSM operators closed 776 of their 1,084 stores earlier this year the second and fourth Sunday of each month. This was supposed to boost the business of small stores on those days.

But the big guys went to court, and local courts ruled in their favor, saying they were being discriminated against. On June 22, the Seoul Administrative Court defended large chains in Gangdong and Songpa districts.

Following that ruling, more discount chain stores across the country filed suits in other courts saying local governments had adopted the ordinance recommended by the national government without holding public hearings or doing other necessary legal procedures.

In a backlash against the rulings, six million small business owners vented their fury at the district courts and declared a boycott on the use of discount marts and SSMs.

“We will stop using SSMs ourselves, and expand the boycott nationwide,” said Lee Sang-bok, vice president of the Incheon Merchant Association, at a rally in Incheon Tuesday attended by 24 small store owners.

Local governments are vowing to fight against the court rulings and revise the ordinances. They claimed that if they resolve procedural problems with them, the big stores will be successfully shut down two Sundays a month.

The Incheon Metropolitan Government said Tuesday it would consider imposing operating restrictions on big stores on major national holidays such as Chuseok, Korea’s equivalent to Thanksgiving, when retail sales are high.

“If a strictly revised ordinance is imposed on retail businesses in Incheon, it will bring a huge loss to the discount stores,” said an employee at the Lotte Shopping.