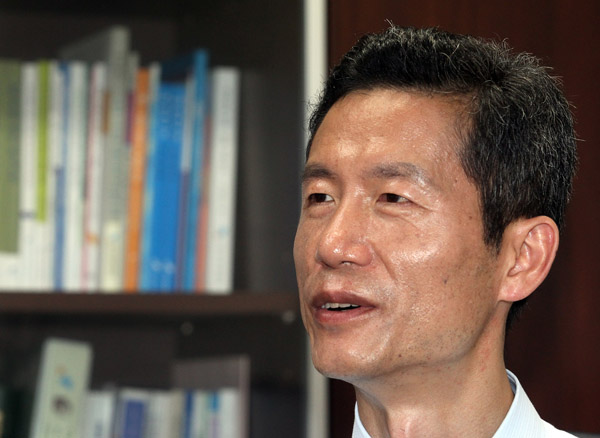 
The torture South Korean activist Kim Young-hwan received from Chinese security officials while detained in China for 114 days was far more brutal than what others close to him reported last week.

Kim himself explained for the first time yesterday that he was not only given electric shock but was also deprived of sleep for a week and was beaten badly in the face.

“Chinese authorities tortured me with an electric prod after giving me an electrocardiogram [that records the electric currents generated by the heart] and a blood pressure check-up,” Kim said in an interview with Yonhap News Agency.

It was the first time he had spoken about the issue since the official press conference that was held one week ago, several days after he arrived in Seoul. The Chinese released him on July 20.

At that press conference he only said that he suffered from both physical abuse and sleep deprivation, but he refused to elaborate.

Kim and three other South Korean activists were arrested by authorities in March in Liaoning Province, northeastern China, on charges of endangering the country’s national security.

The four activists are known to have helped North Korean defectors in China.

According to Kim, after he was arrested, he asked the Chinese authorities for a lawyer or a meeting with the South Korean consul.

But as the Chinese authorities refused to accept his request, Kim decided not to answer the questions about the activities of South Korean activists in China.

Kim said the torture began 13 days after he was arrested on April 10. For seven consecutive days, he was forced not to sleep.

It was on the night of April 15 that he received electric torture. He recalled that a masked security agent used a 50-centimeter (20-inch) electric prod to torture his body for somewhere between five and eight hours. Kim said he was then beaten in the face.

The beating went on for around 30 minutes to an hour. Kim said the agents then switched back to the prod to prevent his face from becoming more bruised, which could leave a scar.

Kim told Yonhap that the physical torture went on for around 12 hours total. They then left him to sleep while sitting on a chair, handcuffed.

The Chinese government, however, yesterday rejected allegations that the 49-year-old was tortured, raising concerns that the case could cause diplomatic friction between the two countries.

“In the process of handling this case, the investigation was carried out according to law,” China’s Foreign Ministry said. “China guarantees the legitimate rights of the South Korean involved in the case.”

Cho Tai-young, a spokesman of Seoul’s Ministry of Foreign Affairs and Trade, said yesterday that “the Korean government will continue to raise this issue with the Chinese.”

“We again pressed the Chinese government to conduct a thorough probe into the allegations,” Cho said.