Defector doesn’t bow to threats from the North

Defector doesn’t bow to threats from the North 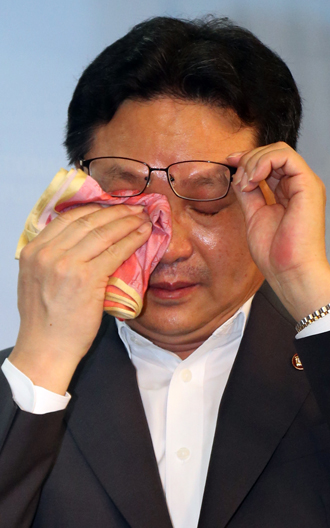 Cho Myung-chul, a defector-turned-lawmaker who was recently threatened by North Korea for his alleged acts against the communist regime, said yesterday that despite the warning, he will continue to fight for the North’s democratization.

“I’m not afraid of the threat,” Cho said at a press conference held yesterday in Yeouido, western Seoul.

“I would feel rather blissful if I died that way [while fighting for North’s democracy].”

On Tuesday, the Committee for the Peaceful Reunification of Korea, a propaganda agency in Pyongyang, released a statement threatening to kill four South Korean activists and North Korean defectors, including Cho, for their involvement in “subversive and sabotaging acts against the Democratic People’s Republic of Korea.”

The other three targeted for punishment by the committee were: Kim Song-min, founder of Free North Korea Radio; Park Sang-hak, head of the Federation of the Movement for Free North Korea who sends anti-North Korea propaganda in giant balloons across the DMZ; and Kim Young-hwan, a South Korean activist who was recently released from detention in China while trying to help North Korean defectors.

“The threat evidently shows that North Korea can never become a regime that is open to reform,” Cho said with tears in his eyes.

“The North has been acting as if there would be a big change under its new leader, but it breaks my heart thinking about North Korean residents who have no choice but to still live under oppression, tyrannical rule and impoverishment.”

Cho, a high-profile North Korean defector and former head of the Institute for Unification Education, became a member of the 19th National Assembly as a proportional representative of the ruling Saenuri Party.

He was a professor at Kim Il Sung University in Pyongyang and defected to the South in 1994. As a newly elected lawmaker, he has long expressed a strong desire to improve the lives and human rights of North Koreans in both North and South Korea.

Kim Young-hwan also said yesterday that he will not give up his activities.

“If my activities are intimidated by such threats, it would mean that I am becoming subject to North Korea’s plans,” he said. “I have no intention of doing that.”

Park of the Federation of the Movement for Free North Korea also said nothing will change because of the threats by the North.

“There were official threats against me by the North from 2008 and in September, last year, there was even a direct terror attack against me,” Park said. “However, I will continue sending anti-North Korea leaflets.”

“Wicked traitor Kim Young-hwan was recently arrested by the Chinese security authorities before being expelled to South Korea,” the committee said in an English-language statement.

“His crime once again confirmed how desperately the regime [referring to the South] is working to destroy and sabotage the DPRK.”

The committee also described Kim Song-min as “the prime mover of the recent attempted terrorism [against the dignity of its supreme leadership]” and Park as a person “who is keen on abduction, terrorism and plots.”

The North’s statement, carried by the Central News Agency, came after Jon Yong-chol, a North Korean defector arrested by the North’s regime for allegedly attempting to destroy key communist statues, said in a press conference in Pyongyang that the reason why he had infiltrated into the North was because he was tasked by the United States and South Korean authorities to launch attacks on the statues.

He said that he was first approached by defector Kim Song-min.

The statement demanded an official apology from the Seoul government and warned that if its demands are not met, there would be “corresponding measures including punishment of criminals involved in monstrous terrorism and other subversive and sabotage acts.”