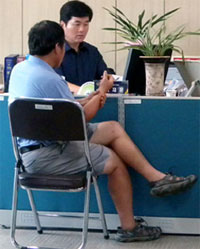 An arrest warrant was issued for the 55-year-old leader of a youth cross-country travel expedition on charges of sexually molesting and assaulting minors under his guidance.

The East Regional Coast Guard said Tuesday that the expedition leader surnamed Kang is under investigation for allegedly touching the breasts of three girls as young as 14 and physically assaulting one boy.

The 16-year-old middle school boy surnamed Choi was one of 56 elementary, middle and high school students that gathered on Thursday at the War Memorial of Korea in Yongsan District, central Seoul, to embark on a 12-day cross-country expedition to marine areas of the east coast of the peninsula including Ulleung Island and the Dokdo islets.

Choi was excited to make new friends during summer break and enjoy an outdoor experience.

The following day, the students boarded a ferry to Ulleung Island off the coast of North Gyeongsang.

Over the next four days, the meals were measly, a roll of kimbap or bowl of ramen at most, with only two meals a day.

They slept in tents set up in a parking lot by the ferry terminal on the island.

On Monday, Choi’s breakfast was a convenience store rice ball.

That day, students embarked on a hiking trip up Seonginbong Peak, the 983-meter (3,225-foot) mountain located at the center of Ulleung Island.

Choi, who had no prior hiking experience, collapsed on the ground in the midst of climbing, exhausted.

But the leader of the expedition, Kang, smacked Choi in the thighs with a tree branch twice and grabbed him by his hair to force him to continue walking.

Kang claimed he hit the boy so the group could make it back down the mountain in a timely manner.

When Choi was about to sit down again, Kang twisted his arm behind his back to force him up and made him walk again.

Choi’s left wrist was fractured, and he had to have it set in a cast when he got back to the mainland.

“It is the worst memory ever and I will never participate in a gathering like this again,” he said.

Three other students reported receiving injuries or being molested by Kang.

After being trapped on the island for four days, on Monday at 9:50 p.m. the victimized students spotted a ship departing from Ulleung Port and pleaded for the sailors on board to help them. The sailors contacted the Coast Guard.

One girl testified that Kang took her hair tie and when she went to him to retrieve it, he touched their breasts.

According to police, in 2007 Kang was sentenced to one year and two months in prison for inflicting an injury during another expedition.

Kang’s youth expedition has been in operation since 2005 and is notorious for its strenuous program and even has an anti-Web site dedicated to it.

“It is true that I hit their legs while climbing, but the kids made up that I sexually molested them and it is not true,” said Kang.

“Parents know beforehand that the expedition is a boot-camp experience.”

Parents who sent their children on the trip after seeing ads in newspapers and on the Internet expressed their shock upon hearing the news.

The Coast Guard said Kang will be dealt with according to the provisions of the Child and Youth Protection Law.