Badminton teams out for throwing games

Badminton teams out for throwing games 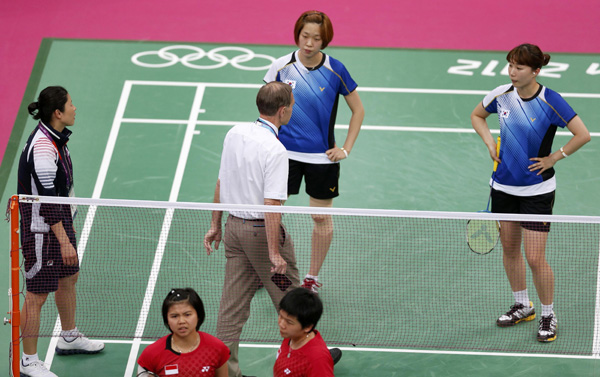 Tournament referee Torsten Berg speaks to players from Korea (in blue) and Indonesia (in red) during their women’s doubles badminton match at Wembley Arena, London, yesterday.[REUTERS/YONHAP]


Two Korean women’s badminton teams were among those kicked out of the London Olympics after trying to lose deliberately during the women’s doubles match to get a favorable draw in the next round.

The Badminton World Federation (BWF) announced Wednesday that eight doubles players from Korea, China and Indonesia will receive punishments after they conducted themselves in “a manner that is clearly abusive or detrimental to the sport.’’

Those eight players are: Jung Kyung-eun, Kim Ha-na, Ha Jung-eun and Kim Min-jung from Korea; Wang Xiaoli and Yu Yang of China; and Greysia Polii and Meiliana Jauhari of Indonesia.

Korea and Indonesia appealed the disqualification, but the BWF rejected the Korean appeal, while Indonesia withdrew its challenge. China didn’t contest the federation’s decision.

Players who are involved in the incident could face much more penalties as International Olympic Committee President Jacques Rogge said in an interview with The Associated Press that the Olympic governing body may take further actions including permanent bans from the Summer Games.

The competition was scheduled to resume later on Wednesday with these four teams in quarterfinals. But now Russian duo Valeria Sorokina and Nina Vislova and Canadians Alex Bruce and Michele Li will advance from Group A. Leanne Choo and Renuga Veeran of Australia and South Africans Michelle Edwards and Annari Viljoen will advance from the Group C.

On Tuesday, Jung and Kim, ranked No. 8 in the world in women’s doubles, played against world No. 1 Wang and Yu. However, the match was as clumsy as it looked with Chinese players making unforced errors while the Korean pairs also played poorly. Both sides drew boos from the crowd and referee Torsten Berg gave warnings to the two teams.

The Koreans eventually won the match in two straight sets, the result Wang and Yu wanted. The loss placed the top Chinese duo in second place in Group A to avoid compatriots Tian Qing and Zhao Yunlei, who finished in second in Group D.

Korean head coach Sung Han-kook said after the match that he was fed up with the Chinese players’ actions, saying “it’s not in the Olympic spirit to play like this.”

However, it turned out that Korea is not in position to blame the other teams as Ha and Kim apparently tried to throw a match against Jauhari and Polii of Indonesia. The two teams also purposely gave up points and made mistakes in an attempt to avoid world No. 1 Wang and Yu in the quarterfinals.

“This is a shame and disappointment,” a netizen wrote on Web portal Naver. “What about other players who put their efforts forward to advance? It is right for these players to be disqualified.”

Some local badminton officials said that the Korean team’s actions weren’t proper, but they could understand why the badminton crew committed such an act since getting good results matters at the Olympics.

They also added that the format of badminton events at the London Games should be fixed.

For the first time in the Olympics, a combination of a round-robin group stage and a knockout phase was introduced. But pundits have pointed out that this format leads to the possibility of manipulating results to set up easier schedules in the knockout stage.

In addition, unlike football, the final matches of the group stage in badminton weren’t played at the same time.