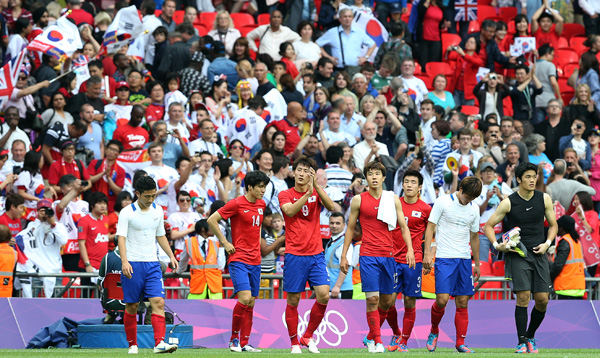 Members of the Olympic football team walk off the pitch after a scoreless draw with Gabon at Wembley, London, early yesterday morning Korea Standard Time. Korea will play Great Britain at the quarterfinal on Sunday at 3:30 a.m. KST. [YONHAP]


The Korean Olympic football team advanced to the quarterfinals of the 2012 London Olympics yesterday, albeit in nail-biting fashion, to keep hopes alive for the country’s first-ever medal in the sport.

Emerging from Group B with five points after a 0-0 draw with Gabon, Korea let slip a chance to play Senegal in the knockout round, a team the young Taegeuk Warriors crushed 3-0 in a tuneup match.

Instead, the squad will face Group A’s winner, Great Britain, a team stacked with English Premiere Leaguers and backed by the home crowd. The match kicks off at 3:30 a.m. on Sunday KST.

The road is tough, but coach Hong Myung-bo has set the bar high, saying Korea is now aiming for gold.

“The ultimate goal for us is to win every match from the quarterfinal on,” Hong told reporters after the match against Gabon early yesterday morning KST.

It is the first time in eight years Korea has advanced to the quarterfinals at the Olympics, and just the third time overall. Korea reached its first knockout stage at the 1948 London Olympics and 2004 Athens Olympics. It lost in the quarterfinals in both outings.

Hong’s squad, which drew with Mexico 0-0 and topped Switzerland 2-1 in the other group competitions, is considered the strongest team from Korea to enter the Olympics.

But the Gabon match yesterday raised doubts, although Korea ended the match with 60 percent of ball possession. Korea was also ahead in the number of shots with 16, seven on target.

The team couldn’t find the back of the net with key strikers Park Chu-young of Arsenal and Koo Ja-cheol of FC Augsburg missing several one-on-one chances with the Gabonese goalkeeper.

Hong said his team should have scored at least two goals, though his players were not in good condition.

“I am sorry that we missed many chances. But this is football,” he said. “It will be a stimulus for the players to prepare for a next match.”

The Korean Olympic team traveled for each of the three Group matches, from New Castle for the Mexico match last Thursday to Coventry for the Switzerland match on Monday and finally to London yesterday.

The team now moves to Cardiff City’s Millennium Stadium for the quarterfinal match against Great Britain. If they get past the hosts, they will move to Manchester for a semifinals.

“It will be tough physically to travel long distances, and we need to recover and get prepared,” Hong said.

The gold medal match will be held back at Wembley in London. Captain Koo said he will do his best to go all the way up the podium.

“I want to come back to Wembley,” he said.

Great Britain has shown improvement through the Group competition, beating Uruguay, which entered the London Olympics as a gold medal favorite with Spain and Brazil, 1-0 yesterday.

Daniel Sturridge of Chelsea scored the winner in the first half. The home team drew 0-0 with Senegal in its first match and beat the UAE 3-0.

Great Britain coach Stuart Pearce told The Mirror, a British paper, that the quarterfinal match against Korea will be important.

“I have said right from the start that we have planned and prepared to win the tournament, and all the teams left know that this next round of matches is huge,” Pearce told The Mirror.

Meanwhile, Japan, the other Asian competitor of the 16-team Olympic finalists, finished first in Group D with seven points and will play Egypt in the quarterfinal on Saturday.

Brazil, who won all three games in Group C, will face Honduras early Sunday. Spain failed to advance from Group D with two losses and one draw.