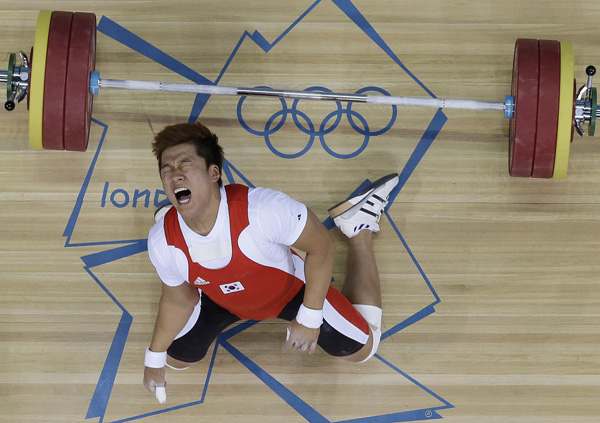 Sa Jae-hyouk of Korea grimaces in pain after dislocating his right elbow during the men’s 77-kilogram weight-lifting competition at the 2012 Summer Olympics, Wednesday, in London. [AP/YONHAP]


Day six of the London Olympics turned out to be a golden one for Korea, but for weight lifter Sa Jae-hyouk, it’s a day he’ll want to forget.

At the ExCeL Arena, Sa was on his way to defend his title in the men’s under-77-kilogram division, but the 2008 Beijing Olympic gold medalist was forced out of competition after dislocating his right elbow during his routine.

The 28-year-old was attempting to clear 162 kilograms in the snatch, but instead he fell off to the floor with a scream, shocking audience members and coaching staff in the arena.

After lying on the floor for three minutes in intense pain, Sa was helped up by his coaching staff and taken to the medical room at the arena, but was eventually moved to a nearby hospital.

Sa first reported that he had a fracture in his right elbow, but it turned out that he had in fact dislocated it. The Korean is currently resting in Athlete’s Village with a cast after nearly two hours of treatment in the hospital.

Coach Lee Hyung-geun said it is rare for weight lifters to suffer fractures or dislocations while lifting the barbell.

“When people can’t hold the weight or maintain the balance, their body throws the barbell instinctively,” Lee said. “But for Sa, he held the barbell while off balanced and that led to the injury.”

An official from Korean Weightlifting Federation said Sa was aiming for “the impossible” at the Olympics.

The Gangwon-born Korean had a difficulty keeping up his form with back pains. He couldn’t practice for more than a month and just about two weeks before the event, his body was finally healthy enough to lift.

When departing for London, Sa said to reporters that he abandoned greediness and emptied his mind, acknowledging that his form isn’t like it was four years ago.

But the mounting concerns seemed like an overreaction when he easily lifted 158 kilograms in his first snatch. His first clearance was enough for the five-foot-five weight lifter to secure at least third place, but apparently Sa wanted more.

His plan was to close the gap with Chinese weight lifters in the snatch and focus on his forte, the clean and jerk, later. But it turned out to be worse than expected.

At the 2008 Beijing Olympics, Sa was the only non-Chinese weight lifter to win a gold medal in men’s weight lifting. Four years ago, he overcame knee, wrist and shoulder injuries to win the event.

But this time, injury was too big for Sa to overcome and his goal for achieving two consecutive Olympic gold medals backfired.