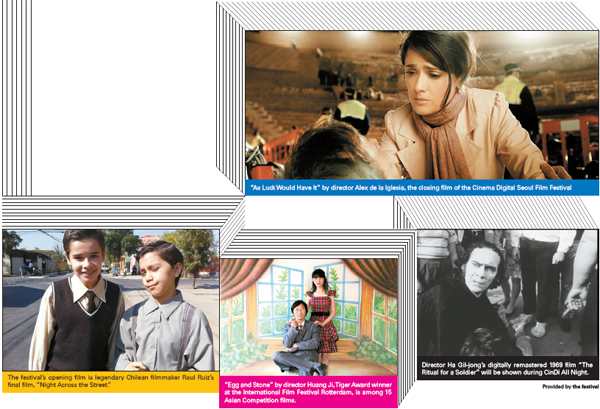 With an ever-growing presence of local films in the international market, the annual Cinema Digital Seoul Film Festival (CinDi) is returning for its sixth year with an aim to take advantage of the country’s digital potential and its film industry.

Along with a new slogan, “Reloaded,” the festival this year features new and improved segments, including documentaries, animations and feature films that have been made using innovative digital technology.

In particular, festival director Park Ki-yong put an emphasis on the revamped Butterfly Project, which provides financial support to up-and-coming digital filmmakers. This year, the festival plans to expand that support to a total of as much as 300 million won ($265,000).

“We’ve been hearing that compared to our ability to find new talent through the festival, our financial support for them has been lagging,” said Park, during a press conference for the festival this week.

“In the past, the program gave financial support to filmmakers for the scenario-developing stage and editing stage, but with the renewal we will now give support for all parts of production, from developing the scenario to getting the film in theaters.”

As an international and competitive film festival, 79 films from 32 countries will be screened from Aug. 22-28 at CGV Apgujeong.

The highlight of the festival will be its Asian Competition Section for digital films. This year there will be four winners, and three of them will receive 20 million won each in prize money.

The films in this section will be judged by directors, critics and distinguished film journalists, including Im Sang-soo, Zeze Takahisa, Gulnara Abikeyeva and Una Beck, among others.

According to CinDi program director and film critic Chung Sung-il, the opening film this year, “Night Across the Street” by Chilean experimental filmmaker Raul Ruiz, was chosen to honor the cinematic legacy of the director, who died last year.

“We wanted to share the memory of a great film director through his last digital film, which marks the end of his long journey in cinema,” said Chung.

“Night Across the Street” tells a story of an old man facing death who experiences a surrealistic dream city. It was screened in the Directors’ Fortnight Section at this year’s Cannes Film Festival.

A new section at CinDi this year is Bright Focus, spotlighting features and animations by rookie Korean directors that showcase exceptional digital technology and style.

Films in this category include “A Monster in the Reservoir” by Lee Sung-gang, “The Window” by Yeun Sang-ho and “Virgin Forest” by Lee Hyun-jung, all of which will have their world premieres at CinDi.

One of the most popular programs at the festival - CinDi All Night - will include screenings of digital films all through the night on Saturday and Sunday.

Director Ha Gil-jong’s film, “The Ritual for a Soldier,” a 1969 film that has been digitally remastered, will be screened. Although the sound for the film could not be retrieved, during the screening at CinDi, musical performances by music director Lee Tae-won and gugak, or traditional Korean music, group Eumakdongin Gomul, will play alongside the film.

“As Luck Would Have It,” a film by Spanish director Alex de la Iglesia, will close the festival. The film, about an out-of-work publicist struggling to provide for his family after an accident, stars Salma Hayek and Jose Mota.

* The 6th Annual Cinema Digital Seoul Film Festival runs Aug. 22 to 28 at CGV Apgujeong in southern Seoul. Tickets are 5,000 won for all films except for those in the CinDi All Night section, which go for 10,000 won.