Eat, drink and be chilled

Eat, drink and be chilled 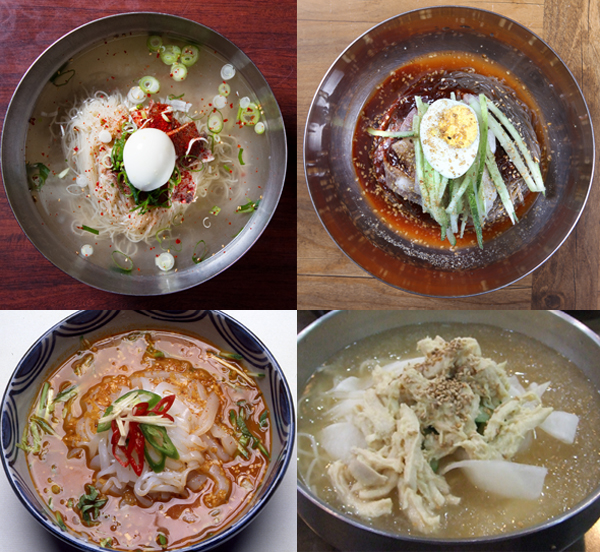 
The sweltering summers in Korea drain our energy and often cause us to lose our appetite. While fans and air conditioners seem to be the only way to survive, for many Koreans the most common way to make it through the humid season is simply to follow the yi-yeol-chi-yeol principle of treating heat with more heat.

It has the same meaning as the English expression “to fight fire with fire” and explains the long lines in front of chicken and ginseng soup restaurants on even the hottest days, as the soup is considered a stamina food.

It is true that sweating is the human body’s natural way to cool itself. But while we crank up the AC, few expats seek out hot, spicy food in the summer.

Cooling down with a frosty refreshing treat is a quick and simple way to combat the heat, rather than sweating like a fountain, even though chicken soup is healthy and tasty.

Here are some of your Korean friends’ favorite summer lunch dishes and their origins. If you’ve had enough of sweating during the day and are looking to cool down with a good brain-freeze, run to the nearest restaurant serving these healthy, delicious and ice-cold summer foods.

It’s one of the most popular cold noodle dishes in Korea and not only during summer time. Naengmyeon is a familiar scene at barbecue restaurants, where people often order it as a sort of chaser, even though they are stuffed with galbi or samgyupsal.

According to “Dongguksesigi,” a book of customs written during the Joseon period, naengmyeon was originally a delicacy only available in winter, but the widespread adoption of refrigerators and freezers made it possible for people to enjoy a frosty cold noodle dish even on a hot summer day.

The most representative regions for naengmyeon are Pyeongyang and Hamheung in North Korea, and Jinju and Haeju in the South. As it is greatly popular among the public, we might assume that naengmyeon was a food for the commoners. However, it actually derived from Joseon-dynasty aristocrats.

At the time, there were high-class restaurants exclusive to high officials and noblemen. People drank and used to calm their stomachs with the cold noodle soup, and it soon became adopted as a hangover cure in the royal community.

After the fall of the Korean Empire, court chefs started cooking Emperor Gojong’s favorite food at local restaurants for the general population. From that time on, the noodle dish became widely popular among all social standings.

The two most well-known varieties are noodles in a chilled broth mixed with dongchimi (radish water kimchi) juice, and noodles mixed in a spicy red sauce. Both dishes are usually decorated with a slice of beef brisket and a hard-boiled egg.

It is okay to be surprised by the great taste and flavor, but don’t be confused when the waiter puts a set of kitchen scissors on your table. You can cut the long, chewy noodles yourself, or they will give the ball of noodles a few snips for you.

“Hoe” is raw fish, and “mulhoe” refers to a raw fish soup. It’s a dish made of thinly sliced fresh raw fish and assorted vegetables in a mixture of water and a spicy sauce with a little bit of vinegar. The dish usually comes in an icy cold, spicy broth or almost like a slushee of crushed ice. Just holding a stainless bowl full of mulhoe will freeze your hands!

Pohang, South Gyeongsang, is known as the origin of the dish. When fishermen were too busy tending to their nets and rods to sit down for a proper meal, they would slice whatever fish they had already caught, thinly like noodles, mix it with vegetables and a watery gochujang sauce, and slurp it up.

Fishermen would drink alcohol in a misguided attempt to fight against the cold on a boat in the ocean, so the spicy raw fish soup also served as a good hangover cure to calm their upset stomachs. Every mouthful will give you a sensation of the tangy flavor and chewy texture in one package.

While raw fish at restaurants is relatively expensive, mulhoe can be enjoyed at affordable prices throughout the year and any kinds of seafood can serve as the main ingredient, including squid, abalone or any white fish. The frosty cold dish is high in protein and its delicious trinity of savory, spicy and sour is definitely great for recovering from a hangover or lost appetite, especially when your tired body needs some energy.

The epitome of the summer stamina food is samgyetang, a hot chicken soup with ginseng, but it can be enjoyed cold as well.

Chicken served in a zesty cold beef broth with fresh vegetables and medicinal herbs is another stamina food on hot summer days. It is called chogyetang, and consists of finely shredded chicken mixed with toppings such as radish, cabbage and pear. It’s flavored with vinegar and mustard as the name hints - “cho” means vinegar and “gye” is North Korean dialect, referring to mustard, not chicken like the Chinese character. It is popular as a great healthy food as all ingredients are low in calories.

Originally, it was also a court food during the Joseon dynasty in Pyeongyang, Hamgyeong and Pyeongan provinces in North Korea. Joseon kings enjoyed this summer stamina food and it was frequently served at court banquets.

If the idea of hot food when the temperature is in the 30s makes you nauseous, try these icy cold summer dishes that will help you fight the summer heat smart, while being refreshed and staying cool as we wait for relief in the fall.