When landing a job at a conglomerate is a job itself

When landing a job at a conglomerate is a job itself 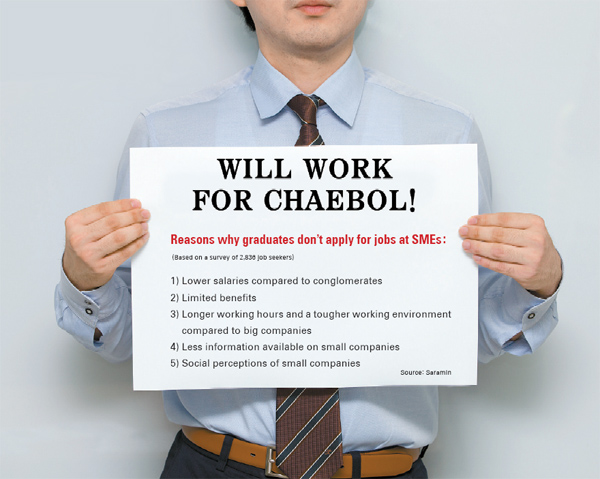 Choi Sun-kyung, 23, walks down a hallway decorated with motivational posters that read “How to land a decent job with low qualifications” or “Shut up and let’s get into big conglomerates!” The corridor finally leads her to a classroom where so-called job coaches lecture on how to write resumes and cover letters as well as job interview techniques.

These schools are becoming increasingly popular in Korea, where parents are the world’s highest spenders on their children’s education.

The intense competition in the college admission and job application processes drives many families to pay for classes in order to get an edge. 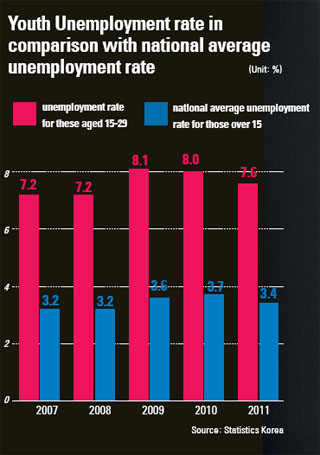 But they may have overdone it. There are too many college graduates seeking a limited number of coveted jobs at major conglomerates, like Samsung and LG, which only account for 13.2 percent of overall employment in Korea, according to Statistics Korea, and offer extensive benefits that in some cases include college tuition payments for every child of an employee.

Unemployment among young adults hovers around 7 to 8 percent, nearly double the national average, but the job market in Korea is unique. According to the SME Federation, 250,000 jobs in small- and medium-sized enterprises went unfilled in 2011. At the same time, many seniors delayed graduation or passed on job offers to have a better shot at big firms.

“I have only one friend who graduated within four years,” said Choi. “The others, including myself, took one year off to increase job prospects. Some do internships and others head to cram schools.”

The trend has led to the rise of a new type of hagwon, or cram school, in Korea. While high school students typically go to cram schools to get an edge in English or math, young adults are now heading to schools specializing in career coaching, from resume building to interview techniques, to stand out in the job application process.

Choi attends one of these programs in southern Seoul.

“I spend six hours there and then take two more prep classes from another cram school for the Toeic,” Choi said, referring to the English proficiency test that is required as a basic qualification for applicants at most major companies.

“A one-hour lunch break is the only time I can take a rest. But I am thinking about cutting that short because other classmates study even while eating their food.” 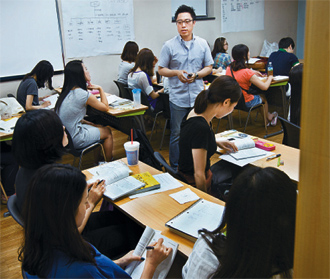 Instructor Cho Min-hyuk lectures students on how to write a resume and what to avoid when writing a cover letter at a five-hour class at the Winspec Job Academy.

Getting a job is a job itself

The rise of so-called job academies comes as college graduates look to gain an edge over other job applicants.

“I started with a class of 23 in 2010 but it has now expanded to over 100, and I teach two more classes,” said Cho Min-hyuk, 36, an instructor at Winspec Job Academy in X. “Few private institutes offered such a course when I first started the job, however, these days, there are many.”

The lectures offered mostly deal with what large conglomerates require in the recruiting process, a major difference from job-search or headhunting services.

The specialized course starts off with feedback on resumes and cover letters. Employers often weed out candidates at most companies based on these materials alone. The class then instructs students on delivering presentations and excelling in group discussions, the next step for those who survive the first round.

The last session is mostly reserved for improving job interview skills, the final stage of the recruiting process.

Cho, the instructor at Winspec Job Academy, was formerly involved in recruitment at Posco, Korea’s leading steelmaker. Most instructors at these academies have previous experience at major conglomerates. His class lasts five hours, during which job seekers receive advice and are taught how to make eye contact during an interview.

“I ask classes to turn in resumes and cover letters to me and then order them from best to worst to propagate feedback by comparing them to each other,” Cho said.

After the regular course, enrolled members gather in a group to engage in a team activity, as the vast majority of big companies require team collaboration during interviews such as a group presentation.

When the Korea JoongAng Daily asked students how effective they thought the classes would be in their job application process, results were mixed.

“I was a sports major and didn’t know anything about the hiring process of companies, so the courses I took helped,” said Yang Chan-woo, 30, who took a three-month course at HR Pairing in Dogok-dong, southern Seoul. He said he has recently landed an interview with a leading pharmaceutical company.

But others were not as satisfied.

“Lessons are sometimes so vague and full of cliches like ‘Be confident!’ or ‘Link your experience with career qualifications’ that my friend and I thought we could give the lecture,” a 23-year-old political science major said on the condition of anonymity. She has taken a prep course in Gangnam District, southern Seoul.

A survey of 2,180 university students revealed in June that 77 percent of respondents are taking a private course related to their future job search and spend an average of 321,000 won per month on the services.

“When you try to improve job prospects, it always costs money. For a better profile photo on resumes, I needed to go to a well-known studio. I also had to be well dressed during job interviews and presentations,” Lee said.

The fee for job-prep courses varies as there is no established rule for cram schools targeting job hunters.

In addition to money, students devote a lot of time to the perfection of their job applications.

Will work for chaebol!

A line of colorful clear file folders under the label “Cases of those who passed the employment exam” occupy the shelves at cram school HR Pairing in southern Seoul. Inside are profiles of enrolled members who managed to land coveted jobs. Their universities, grade point averages, standardized English test scores and any relevant certificates are all included. At the bottom of the page, business cards of the members - most with “Samsung” or “Hyundai” stretched across the bottom - are attached.

These files are shown to prospective students who come for consultations prior to registration.

“Ninety-five percent of the college graduates coming here aim for nothing but jobs with chaebol,” said Shin Hyun-jong, who runs the private career prep institute.

A job opening at Samsung Group attracted more than 50,000 applicants earlier this year, hitting a record high. The competition rate was 11 to 1 compared to the average rate of 65 to 1. Most big companies bring in tens of thousands of job hunters.

“I applied for more than 50 firms last year, but most of the time I had to compete with over 10,000 people,” said Choi Sun-kyung.

The hiring season of big firms is when job coaches are in especially high demand. In Korea, major firms hold open job recruitment periods twice a year at around the same time.

“In March and September when a number of big companies start selecting and training new staff members, I have half as many enrolled members,” Cho said.

Despite the ferocious competition, a majority of job hunters keep their sights on only the top companies.

According to a survey of 2,836 job seekers conducted by Saramin, an online job-search firm, 55 percent of respondents said they will not apply to small- and medium-sized companies even if they fail to get into a big conglomerate.

“When I was looking for jobs last year, I received calls from several SMEs, but I didn’t go,” said Lee Do-hoon, 28, who now works for Hanjin Shipping, Korea’s largest shipping company.

“It was obvious that large firms offer far higher salaries and perks than small- and medium-sized companies and the big firms are well recognized,” Lee said.

Some analysts said the huge disparity in salary between large companies and small enterprises is an important factor that drives competition.

“In Korea, there is a huge gap in payment and other benefits between large and small companies, and the working environment for small- and medium-sized firms is too poor,” said Shin Kwang-young, a sociology professor of Chung-Ang University.

“The root cause of the fierce competition in job hunting is not job applicants only aiming for big firms but a social system where there is a huge polarization in working and pay conditions between big and small companies,” Shin said.

Some analysts point to the high college enrollment rate. Around 72.5 percent of high school graduates went on to further education in 2011, according to Statistics Korea

“Most university graduates feel ashamed if they find a job with small- and medium-sized companies,” said Hwang, the senior researcher at Korea Economic Research Institute.