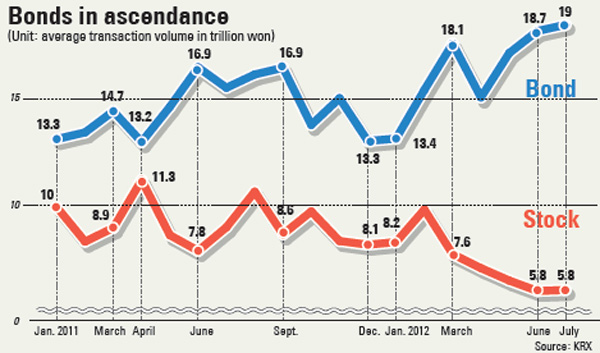 In contrast, daily trading in the stock market went down to an average of 5.82 trillion won last month, down 27.9 percent from December’s 8.08 trillion won.

“The plunge in average daily stock turnover shows that investors tend to avoid risk-involving investments,” said an official at KRX.

“The trading volume of the stock market in August last year reached 10.72 trillion won per day as the Kospi sank after the U.S. credit downgrade,” he added, “but this July’s volume is much less, showing how seriously investors worry about the euro zone’s fiscal troubles.”

Daily trading of bonds, which stood at 13.37 trillion won in January, began to shoot up in March when Europe’s crisis came under the spotlights, rising to 18.1 trillion won.

Trading slipped to an average of 15.42 trillion won in April but rose again the following months after the economies in China and the United States showed renewed weaknesses.

The gap between the stock and bond markets was also seen in total payment.

According to the Korea Securities Depository, while stock payments decreased 57.1 percent year-on-year in the first half of this year, bond payments grew 44.7 percent in the primary bond market and 7.5 percent in the secondary market.

“As financial markets become increasingly vulnerable, investors tend to prepare for the worst case scenario in advance and their preference for safer assets is more intense than ever.”

According to the Financial Supervisory Service, foreign investors’ net buying of Korean bonds reached a record high of 7.1 trillion won in June.

“Foreign investors find the local bond relatively attractive because its size and liquidity are big for Asia,” said Jeon So-young, an analyst at Hanyang Securities.